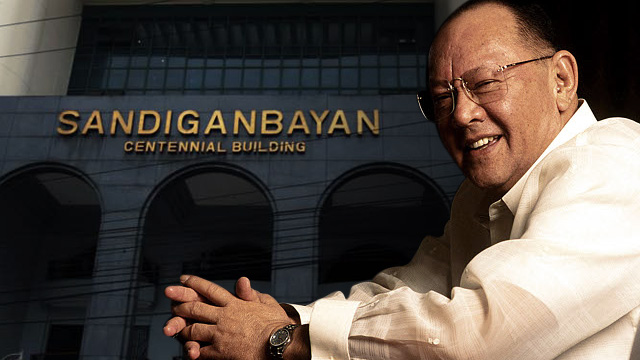 MANILA, Philippines – The anti-graft court Sandiganbayan has thumbed down the motions of businessman Eduardo “Danding” Cojuangco to dismiss his ill-gotten wealth cases for denial of a speedy resolution, citing the right of the people to “public justice.”

The Sandiganbayan’s Second Division issued the resolution on April 18, which was released to media on Friday, April 21, turning down Cojuangco’s appeals to drop his civil cases for being too long in the mill.

The court took note of the instances that Cojuangco’s co-defendants filed their own motions to dismiss, which contributed to the delay in the cases.

The court sided with President Commission on Good Government in saying that Cojuangco was also not proactive in getting a speedy resolution of is cases because he filed the motions to dismiss only in 2015.

“Cojuangco slept on his right to a speedy disposition of cases for more than 12 years. Thus, his silence is deemed a waiver of such right,” the court said.

The Sandiganbayan also said that while Cojuangco may be crying prejudice, the government is prejudiced as well.

It concluded: “Both plaintiff and defendant are prejudiced by the delay. Jurisprudence dictates that individual rights do not preclude the peoples’ right to public justice.”

The original civil case was filed in 1987, and was split into 8 in 1995 because of the different transactions involved. The court dismissed in 2008 civil case number 0033-C, which involves P998 million worth of damages to agriculture stakeholders.

The civil suits are concerned with how Cojuangco allegedly manipulated coco levy funds to benefit him and other cronies of the late strongman Ferdinand Marcos. None of the 7 remaining cases are on trial.

Taken together, the government, through the PCGG, is going after more than P8 billion in alleged ill-gotten wealth amassed by Cojuangco with the help of Marcos.

In 2015, Cojuangco filed motions to dismiss 3 civil cases.  (READ: The politics of the coco levy scam: From Marcos to Noynoy Aquino)

Cojuangco invoked his right to speedy disposition of cases and argued that the PCGG was taking too long to resolve the civil suits.

In these cases, the PCGG filed what is called a motion for partial judgment, which is filed if you want your case resolved without having to go on trial.

If granted, the court will issue a judgment based “on the facts as pleaded and is based exclusively upon the allegations appearing in the pleadings of the parties and the accompanying annexes.”

For Cojuangco, the motions “show a lack of desire on the part of the plaintiff to prosecute the case.”

“The defendant insists that there is no reason for plaintiff to refuse to proceed to trial since it had declared in all the verifications in all subdivided complaints that it is in possession of evidence to prove its allegations,” Cojuangco was quoted in the court’s resolution.

In case 0003-D, Cojuangco noted that that the last time there was a development was in 2005, when the Sandiganbayan heard the motion for partial judgment.

For the PCGG, Cojuangco “tolerated the delay since he also failed to take any step to accelerate the disposition of the case at an earlier time.”

The PCGG also defended itself for the delay, saying “the evaluation of voluminous documents, and the tedious investigative work required a considerable length of time to accomplish.” (READ: Search for Marcos’ wealth: Compromising with cronies)  – Rappler.com