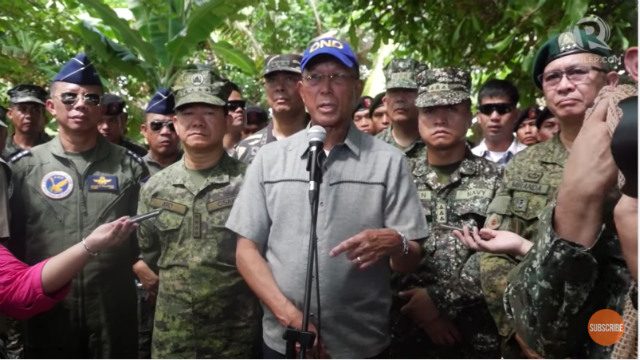 The head of the Department of National Defense (DND) was accompanied by Armed Forces of the Philippines (AFP) chief General Eduardo Año and other top military officials to Pag-asa Island on Friday, April 21.

Pag-asa Island is found in Kalayaan, a town created by the late dictator Ferdinand Marcos in 1978, which is now home to around 180 Filipinos with their own mayor.

Reacting to Lorenzana and Año’s trip to Pag-asa, Chinese Foreign Ministry spokesman Lu Kang said on Friday that this “runs counter to the important consensus” reached by Manila and Beijing “to properly deal with the South China Sea issue.”

“Gravely concerned about and dissatisfied with this, China has lodged representations with the Philippine side,” Lu said.

He said China hopes the Philippines “could cherish the hard-won sound momentum of development” in the bilateral ties between the two countries.

He also requested the Philippines to “maintain general peace and stability in the South China Sea.”

Philippine Department of Foreign Affairs (DFA) spokesman Robespierre Bolivar reacted by saying that “the Chinese have conveyed their sentiments.”

“We have already stated our position that Pag-asa, and the larger Kalayaan Group, is a municipality of Palawan and that our visits there are part of the government mandate to ensure the safety, well-being, livelihood, and personal security of our citizens there,” Bolivar added.

In another statement, the DFA said it defers to the DND and the AFP “on how best to fulfill their constitutional mandates with respect to improving the safety, welfare, livelihood, and personal security of Filipinos” in Kalayaan.

“When our flights receive verbal or radio challenges, our standard response is: The Philippines has long been undertaking customary and routine maritime patrol and overflight in the West Philippine Sea, which are lawful activities under international law. Such flights will likewise enable us to reach our municipality,” the DFA said.

Meanwhile, Presidential Spokesperson Ernesto Abella said on Sunday, April 23, that the visit to Pag-asa Island is “part of the efforts to improve the safety, welfare, livelihood of Filipinos residing and living in the municipality of Kalayaan which is part of the province of Palawan.”

“The Philippines has long been undertaking customary and routine maritime patrol and overflight in the West Philippine Sea which are lawful activities under international law. Such flights will likewise enable us to reach our municipality,” he said in a statement.

During his trip to Pag-asa Island, Lorenzana vowed to allot P1.6 billion* ($32.1 million) for the long-delayed construction of facilities there, mainly to repair a dilapidated runway.

In a separate interview with Rappler, Año said he was “so proud” especially to have sung the Philippine national anthem on the disputed island. “It symbolizes we really own this territory,” he said. – Rappler.com