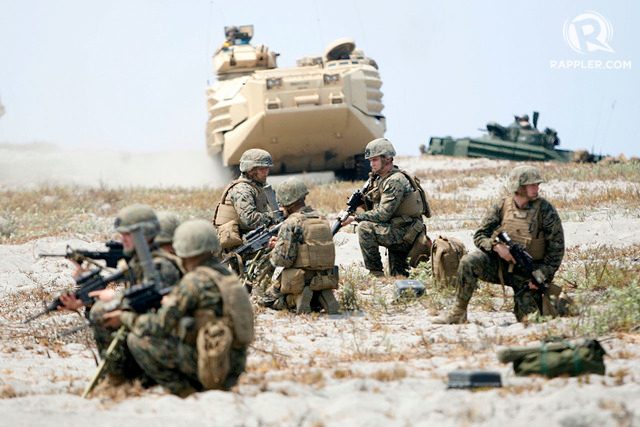 MANILA, Philippines — US soldiers participating in the first Balikatan exercises under President Rodrigo Duterte have arrived in the Philippines.

The 33rd iteration of the annual joint exercises between the US and Philippine militaries will formally begin on May 8, but “preliminary work” on community infrastructure projects have began, according to a statement issued by the US embassy on Monday, April 24.

“Philippine and US forces will kick off Exercise Balikatan 33-2017 through community engagement activities in Panay, Leyte, and Samar.  US and Filipino service members will work together to renovate 5 schools and conduct community medical engagements with local residents in the opening days of the 12-day military training exercise. Preliminary work on community infrastructure projects began mid-April,” the US embassy said.

The first Balikatan exercises under Duterte will focus on humanitarian assistance and disaster response and counter-terrorism.

But Duterte appeared to have been persuaded to let it continue although naval exercises in the West Philippine Sea (South China Sea) were scrapped. (READ: The ‘last’ war games in the West PH Sea)

“Balikatan is designed to meet current challenges facing the Philippines… Along with preparing the U.S. forces’ and AFP’s ability to respond to natural disasters and deliver humanitarian aid, Balikatan will also increase our militaries’ counterterrorism capabilities,” said US embassy press attaché Molly Koscina.