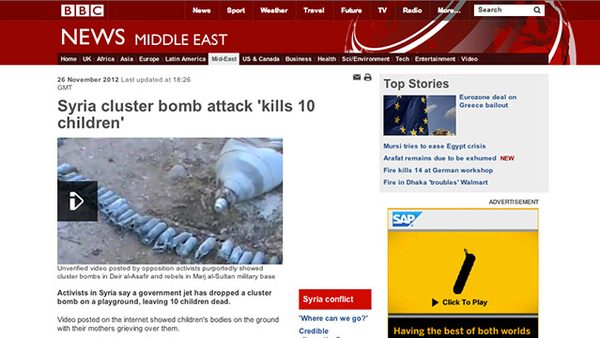 10 children were killed after an attack on a playground in the Damascus suburb of Deir al-Asafir Sunday, November 25. Activists reporting of the attack say government jets dropped cluster bombs over the playground. Video taken after the attack showing graphic images of dead children was posted on YouTube and has since spread on social media. Activists reporting of the attack say, “none of those killed were older than 15 years old.” The International Red Cross however has been unable to confirm the claims. CNN reports about 67 people were killed across Syria on Monday as fighting continued. Almost 40,000 civilians are believed to have died since the war broke in March 2011. Rebels continue to fight against the rule of President Bashar al-Assad.