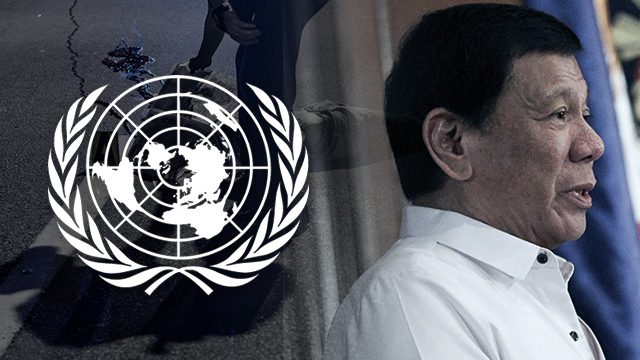 MANILA, Philippines – Representatives of the Duterte administration are set to defend the government’s drug war and human rights record before the United Nations Human Rights Committee on May 8.

The Philippine delegation to the Third Cycle of the Universal Periodic Review of the UN Human Rights Council will be composed of Deputy Executive Secretary Menardo Guevarra; Senator Alan Peter Cayetano, chair of the Senate committee on foreign relations; and Undersecretary Severo Catura, head of the presidential human rights committee.

According to Cayetano, they are set to leave Manila on Thursday, May 4, for Geneva, Switzerland, to attend “side events.”

“[We will be] presenting the human rights report for their [UN’s] 3rd review, which is every 3 years,” the senator said in an interview on Tuesday, May 2.

The Philippines drew criticisms from international groups including the UN and the Human Rights Watch for its bloody war on drugs and human rights violations, stemming from extrajudicial killings.

Cayetano, Duterte’s staunch defender, said he is “ready” to defend the country before the UN.

Aside from the killings, the UN has also questioned the country’s plans to reimpose the death penalty. (READ: UN on death penalty: PH will break int’l law)

As for the summary executions, Cayetano said he would not deny that there are indeed human rights violations. But these, he maintained, are not state-sponsored amid Duterte’s open support for killing of drug suspects.

“We’re also honest that there are human rights violation, but it is not state-sponsored. We have to be careful to communicate to the world what’s really happening but to properly assign blame. Kailan pulis [ang] may kasalanan, kailan pusher ang may kasalanan,” the senator said.

“Huwag natin sabihin na walang pagkakamali ang pulis (Let’s not say that the police have not done anything wrong) but let’s not blame everything on the police or uniformed personnel, when it’s the drug lords pulling the strings,” he added.

During the conference, Cayetano said they would trace the history of the proliferation of illegal drugs in the country.

Duterte has repeatedly condemned the UN for criticizing or supposedly interfering in his war on drugs that has resulted in the deaths of at least 7,000 Filipinos, both from legitimate police operations and vigilante-style or unexplained killings. (READ: United Nations drugs board slams killings in Philippines)

Despite Duterte’s tirades, Filipinos’ trust in the United Nations rose to 82% as of March 2017 – an 8-percentage point rise from the UN’s 74% trust rating in December 2016, according to the latest Pulse Asia Research, Incorporated survey. – Rappler.com