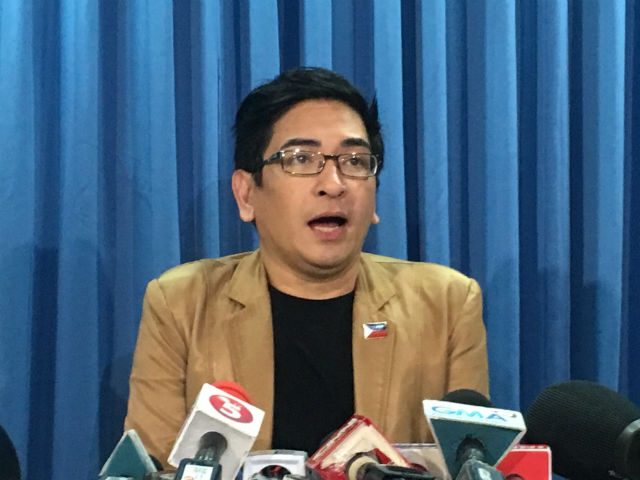 Lawyer Bruce Rivera, spokesperson of the Impeach Leni Movement, said on Tuesday, May 2, that they finished drafting the document the night before.

But they were asked to give a copy of their impeachment complaint to the office of a male lawmaker whom they refused to name. This lawmaker supposedly expressed support for the group when they announced their plans against Robredo last March. (READ: ‘Robredo peddling lies,’ says Impeach VP Leni Team)

Rivera said they also distributed copies of the complaint to offices of other lawmakers whom their source said they could get an endorsement from.

“Initially, the intention was to file at the secretary-general’s office. However, we were instructed that we are to send it to a congressman’s office because the congressman involved will be the one to forward it to the secretary-general’s office,” said Rivera, who was the lawyer and spokesperson for alleged pork barrel scam mastermind Janet Lim Napoles.

He said the lawmaker is currently reviewing the contents of the impeachment complaint.

“Here is the deal. While we were forming it, they already reached out and said that we continue it because that’s what they also wanted and that they wanted to endorse,” said Rivera.

“It’s just that, of course, we just have to, you know, in more ways than one, we have to understand that there are, they have to be a little bit circumspect about it, and you know, tread lightly,” he added.

There are rumors that Impeach Leni Movement is referring to Puwersa ng Bayaning Atleta Representative Jericho Nograles, but he denied this.

“It’s not true. I’m actually shocked that my name is being dragged into this… I have nothing to do with any impeachment complaint,” said Nograles in a statement.

The two based the complaint on Robredo’s criticism of Duterte’s war against drugs in a video played at an event in Vienna, Austria mounted by a non-governmental organization.

Duterte, however, already said he will not allow Robredo’s impeachment, telling his allies to “lay off” the Vice President.

The Impeach Leni Movement is accusing Robredo of betraying public trust, culpably violating the Constitution, and graft and corruption.

For one, Rivera said Robredo’s criticism of the drug war was not based on accurate information.

“The 7,000 killed in summary executions in the speech itself does not have any source. It’s not confirmed. Even if she said it was based on something else, it must be stated. The irresponsibility and recklessness, for me, is unforgivable,” said Rivera.

He also claimed that Robredo misdeclared her Meralco shares in her Statement of Assets, Liabilities, and Net Worth.

“We looked at her Statement of Assets, Liabilities, and Net Worth and we found that she has Meralco shares that are stated only as business interest without any amount. That is, by itself, a misdeclaration. And that was the reason why [Chief Justice Renato] Corona was impeached,” said Rivera.

He added that they have requested a copy of Robredo’s records of her latest travels and expenditures, but this request has not yet been entertained by the Office of the Vice President.

“And that in itself is dubious because she is still part of the executive,” said Rivera.

The Impeach Leni Movement also said that when Robredo was still housing czar, government money from the Home Development Mutual Fund or Pag-IBIG Fund was used to sponsor a non-housing-related national convention in the United States.

According to Rivera, the convention was attended by Filipino-Americans, most of whom are American citizens.

“And it’s not even connected to housing. It’s more for empowerment, and she was the one invited there. So imagine a Vice President who is having the funds of people [that] is supposed to be for housing, to help Filipinos get a good house, have a good house to live [in], and uses the same in order for, you know, to sponsor something about empowerment. No relation whatsoever to housing,” he said. – Rappler.com