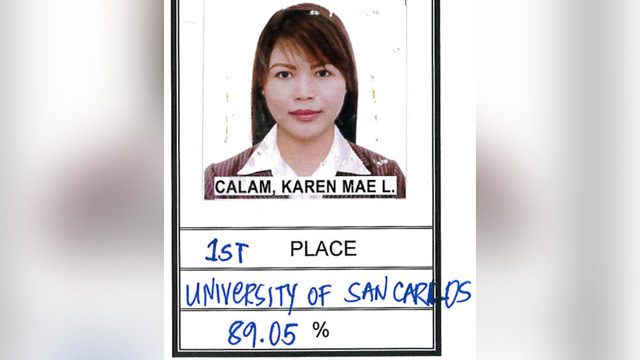 Four of the top 10 passers – all from schools outside Metro Manila – are from the University of San Carlos. (READ: List of passers: 2016 Bar Exams)

The rest of the Bar topnotchers announced by the Supreme Court (SC) on Wednesday, May 3, are the following:

Presidential Spokesperson Ernesto Abella congratulated those who passed, saying: “We pray that many of the successful examinees would pursue a career in government and join us in building a progressive and inclusive nation with a trustworthy government run by young people full of idealism, integrity, and excellence.”

The results were released by the SC en banc after a special deliberation by the justices on Wednesday morning.

Rumors spread on social media that there was an exam leak for commercial law and criminal law, but they were quickly dismissed for having no basis by 2016 Bar Exams chairperson Associate Justice Presbitero Velasco.

Since 2000, the highest passing rate recorded was in 2011 when 31.95% passed the Bar. That year, Ateneo graduate Raoul Angelo Atadero topped the Bar.

The lowest rate also since 2000 was in 2012 when only 17.76% passed the Bar, despite the passing grade being lowered to 70%. (READ: FAST FACTS: Philippine Bar examination)

For the 2015 Bar Examinations, 26.21% passed as University of the Philippines or UP Law reclaimed the top spot with its own Rachel Angeli Miranda.

In the last 7 years, Ateneo, UP, and San Beda have held the Bar’s plum spot. – Rappler.com