Feb 22, 2012 12:29 AM PHT
Natashya Gutierrez
Facebook Twitter Copy URL
Copied
Is the defense setting the stage for a mistrial? 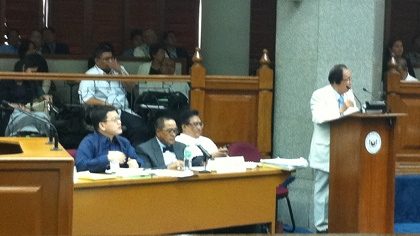 Lead counsel Serafin Cuevas raised concerns that he said could lead to a mistrial, or an invalid trial due to errors in the proceedings.

The concerns Cuevas raised included the permission given to senator-judges to speak for more than 2 minutes, and the fact that neither the defense nor the prosecution can object to questions posed by members of the Senate to the witness.

Cuevas appealed for a review of Rule 17 of the impeachment court stating that a senator can put a question within 2 minutes to the witness or to both the defense and prosecution. It also states that the senators can offer a motion in writing.

Presiding Officer Juan Ponce Enrile has allowed senator-judges to speak longer than 2 minutes when on the stand. They have also been allowed to ask for the issuance of subpoenas, and are permitted to ask whatever questions they please without objection from either side.

“We are pleading for a reexamination of this rule to avoid the usual occurrence of a mistrial,” said Cuevas to the court. “Because while it is true that the proceedings of this court as of this moment may not amount to a mistrial,  it is equally discernible that it may be raised in the future.”

In the past, as in former president Ejercito Estrada’s impeachment trial, counsels were allowed to object to senator-judges, said Cuevas.

He also commented on the nature of the questions asked by the senator-judges, which has led to the subpoena of documents that have not yet been proved to be material or relevant.

He said when a senator-judge’s order is approved and a subpoena is issued, while the defense can submit motions to quash the subpoenas later on, it may well be overruled – and may be too late.”Aanhin pa ang damo kung patay na ang kabayo?,” he said. “We say this may amount to a mistrial because there is nothing left in favor of an impeachable public officer,” he said.

Corona’s lead counsel also mentioned that the ongoing impeachment trial could be nullified, as proceedings may violate the constitutional rights of Corona.

“There is no other recourse before this honorable court and the only recourse is to go to the Supreme Court of the Philippines,” he said.

This is not the first time Cuevas has expressed the possibility of a mistrial being declared and seeking the help of the High Tribunal.

The issue of a mistrial was raised when Corona submitted a supplemental petition to the Supreme Court accusing certain senator-judges of their partiality towards the prosecution. The defense also warned of a mistrial in late January when they said the spokesmen of the prosecution discussed merits of the case with the public.

In the past, Enrile said that a declaration of a mistrial was not at all possible.

The prosecution has said that the hints at a possibility of nullifying the current proceedings by the defense is a strategy, wherein the defense is setting the stage for their eventual approach to the Supreme Court.

After the defense held a surprise press conference accusing the Office of the President of bribing senator-judges in exchange for their vote to defy a temporary restraining order issued by the Supreme Court, prosecution spokesperson Rep Sonny Angara called it a tactic. “They are laying the basis for a mistrial. They are conditioning the mind of the public,” he said.

The defense has denied these accusations.

Defense spokesperson Tranquil Salvador III said they are not hoping for a mistrial, nor are they planning to declare one. He said Cuevas only raised the possibility to protect the rights of the Chief Justice.

Karen Jimeno, another spokesperson for Corona’s team, agreed. She said they had even asked about the validity of the complaint early on, precisely to avoid a mistrial.

Enrile said he will discuss the concerns of the defense with the senator-judges in a caucus. –Rappler.com