House begins probe into BuCor-Tadeco deal on May 9 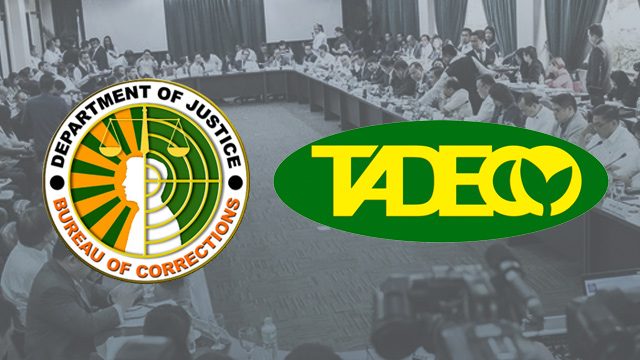 On Tuesday, May 9, the House committee on good government and public accountability as well as the justice panel will look into the joint venture agreement between BuCor and Tadeco.

The hearing will be held at the Montilla Hall, South Wing Annex of the Batasang Pambansa at 9:30 am.

The probe stems from House Resolution (HR) Number 867 filed by Speaker Pantaleon Alvarez, who said the government is “prejudiced” by as much P106,167,191 per year because of the contract.

This was renewed on May 21, 2003, with BuCor guaranteed an annual production share of P26,541,809, which will automatically increase by 10% every 5 years. The joint venture agreement also states that BuCor must receive profit shares with respect to the leased lands where the bananas are planted.

DPPF inmates are also sent to work at Tadeco’s banana plantation as part of BuCor’s rehabilitation program, but Alvarez claims the prisoners are “ill-treated, exploited,” and paid substandard wages.

Alvarez was a longtime friend of Floirendo, but their political rift began after their respective girlfriends fought late last year. (READ: Graft complaint vs Floirendo not about feuding girlfriends – Alvarez)

The Speaker has since cut ties with Floirendo, filing both a House resolution and a graft complaint against the so-called “Banana King” of the Philippines.

“Politics aside, every accusation that a public transaction is highly detrimental to government is a grave matter that we are duty-bound to investigate painstakingly,” said the Surigao del Sur 2nd District Representative.

“Under the law, the performance of any contract deemed ‘manifestly and grossly disadvantageous’ to government constitutes a punishable corrupt practice, whether or not the public officers involved profited or will profit from the transaction,” he added.

Upon Alvarez’s request, the Department of Justice (DOJ) and the Commission on Audit (COA) formed their own fact-finding and audit teams, respectively, to look into the BuCor-Tadeco deal.

Both the DOJ and the COA teams said the contract is unconstitutional and should be voided. Solicitor General Jose Calida shared a similar opinion.

Makabayan bloc lawmakers also recently filed a second resolution calling for a probe into the BuCor-Tadeco contract, saying the deal got in the way of distributing lands to farmer-beneficiaries under the Comprehensive Agrarian Reform Program. – Rappler.com