Cayetano to UN: No new wave of killings in PH 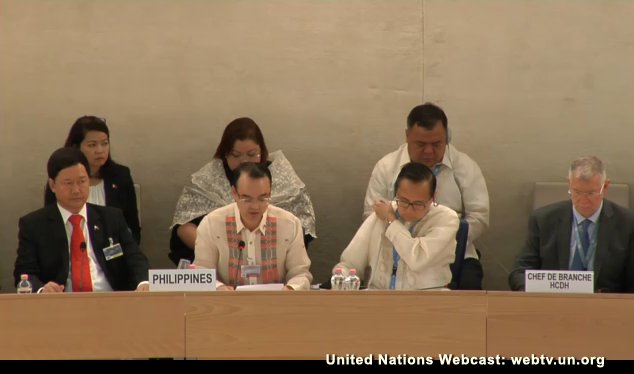 MANILA, Philippines – Senator Alan Peter Cayetano reported to the United Nations Human Rights Council on Monday, May 8, that there is no new wave of killings in the Philippines under President Rodrigo Duterte.

In his opening statement for the Universal Periodic Review (UPR) held in Geneva, Switzerland, Cayetano hit critics – including the Commission on Human Rights – and the media for “changing the meaning” of extrajudicial killings, thus “deceiving the world.”

He also slammed western media for “inaccurately” reporting on the drug war happening in the Philippines by making use of the “alternative facts” of critics.

“There’s no new wave of killings in the Philippines, just a political tactic of changing definitions,” he said, adding that the number of homicide cases is “well within” the average of the past administration.

Cayetano, Duterte’s running mate in the elections, leads the Philippine delegation to the UPR, which happens every 4 years. This year’s review covers the last 4 years of the presidency of Benigno Aquino III and the first 9 months of the Duterte administration.

The review comes amid criticism of Duterte’s bloody war on drugs.

As of April 23 this year, 2,717 suspected drug personalities have been killed in legitimate police operations since the start of the Duterte administration, according to data from the Philippine National Police (PNP). There are 3,603 deaths under investigation. (READ: IN NUMBERS: Philippines’ ‘war on drugs’)

While “one death or any killing is one too much,” Cayetano said that there is an “attempt” to include all homicides as drug killings.

“Make no mistake, any death or killing is one too much. However, there is a deliberate attempt to include all homicides as EJKs or killings related to the campaign against criminality and illegal drugs, and that these are state-sponsored, which is simply not true,” he explained.

The rising number of deaths in the hands of police was allegedly the result of the huge number of operations conducted against illegal drugs.

Cayetano further defended the war on drugs, stating that it is being pursued to prevent the country from turning into a narco-state. Duterte, he said, ran for president because of the “demand of people for real change.”

“[The Philippines] is a very young nation. Do you blame our parents, state [for] taking care of our young people who are most vulnerable?” Cayetano said, after showing video clips and newspaper headlines of crimes in the country.

The Duterte ally said the government is committed to institute reforms to protect human rights for Filipinos.

“We are committed to change, rule of law, and upholding human rights,” Cayetano said. – Rappler.com