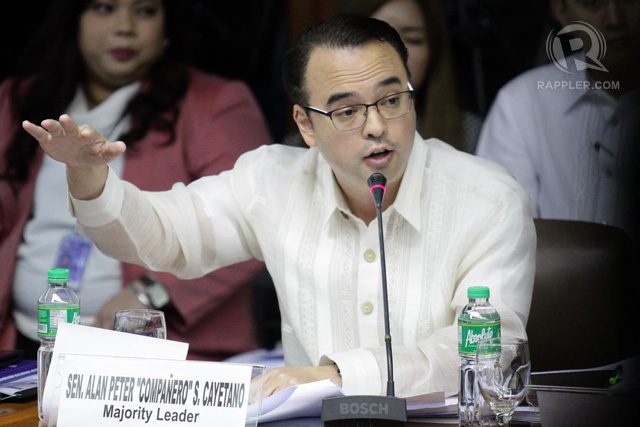 Duterte made the announcement before he left for Cambodia to attend the World Economic Forum on ASEAN 2017. Asked who will be the next DFA chief in a pre-departure news briefing, the President said he signed some appointments before he left his office.

“I saw the name of Senator Cayetano sa (in the) DFA. Ngayong hapon lang na ito (It’s just this afternoon),” he said.

Cayetano had been Duterte’s running mate in the 2016 elections. He had long been eyed as either foreign affairs or justice secretary, but could not be appointed due to the one-year ban on appointing losing candidates, which just lapsed.

He will replace Acting Foreign Secretary Enrique Manalo, who was appointed after Perfecto Yasay Jr, Duterte’s first pick as the country’s chief diplomat, was rejected by the Commission on Appointments for lying about his American citizenship.

Cayetano has been joining the President’s trips abroad, apparently in preparation for his new career.

He was part of the 3-member Philippine delegation to Geneva, Switzerland, for the Universal Periodic Review (UPR) of the Philippines. He defended the Duterte administration’s bloody war on drugs before the United Nations Human Rights Council. (READ: Cayetano to UN: No new wave of killings in PH)

Cayetano, a lawyer, comes from a political family. He served as Taguig-Pateros representative before he won a seat in the Senate in 2007. (READ: 10 things to know about Alan Peter Cayetano) – Rappler.com