How Cimatu found out he will be DENR chief 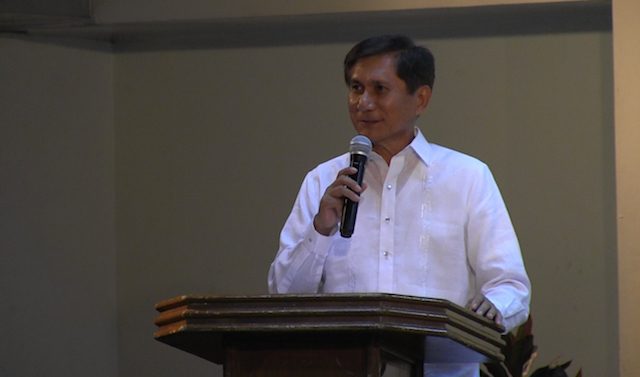 MANILA, Philippines (UPDATED) – Environment Secretary Roy Cimatu on Wednesday, May 10, said he, too, was surprised that he became the head of the Department of Environment and Natural Resources (DENR).

It was a surprise, he said, because he learned of his appointment just hours before he took his oath of office.

During his welcome ceremony on Wednesday, Cimatu recalled that he was in Malacañang on Monday, May 8, to submit a request for travel to South Korea.

“[We want to travel] to take a look at the contingency plan of the Philippines because of the tension in North Korea – that’s my job as the special envoy. So we were there when I was called to go to the premier guest house in Malacañang,” he shared.

Cimatu said President Rodrigo Duterte invited him to join the Cabinet meeting that day, but he was only wearing a polo shirt.

“So I was in polo shirt, all the secretaries were in barong. So sabi ko (so I said), I was not prepared for this, so I was looking for PSG (Presidential Security Group) colonels, and asked one of the PSG colonels, ‘Meron ka bang barong? Pahiram (Do you have a barong? Let me borrow).'”

Cimatu then shared that the oath-taking happened “all of a sudden,” just right after the prayers during the Cabinet meeting.

“So we had an oath-taking already there, the seal of the President at the background…. [Naghanap] pa sila ng (They even looked for an) oath of office for several minutes, and then after that, oath-taking. After that, I told myself, is this real? Is this happening? I’m already appointed as DENR secretary,” he recalled.

In a news briefing on Wednesday, the President said he just suddenly thought of  Cimatu while he was mulling over candidates for the DENR.

“I was thinking of many guys, but I remembered General Cimatu who served Davao in the years when I was a congressman and he is a good officer, a true soldier, and I am impressed with his industry….He will remain loyal to his oath. I can assure you that everything…would be alright and the DENR is in safe hands,” Duterte said.

The former ambassador and chief of the Armed Forces of the Philippines on Wednesday asked DENR employees to give him time to adjust to his new role as environment secretary.

He also answered questions regarding allegations on his human rights record and his involvement in the military’s “pabaon” system.

Cimatu replaces Gina Lopez, whose ad interim appointment was rejected by the powerful Commission on Appointments last May 3. – Rappler.com