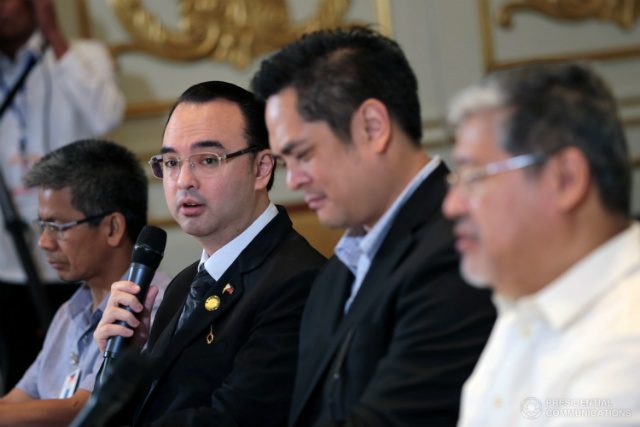 MANILA, Philippines – The Philippines’ incoming foreign secretary, Senator Alan Peter Cayetano, vowed to reject “microphone diplomacy” at the Department of Foreign Affairs (DFA), as he promised to “keep building bridges” with other countries.

Cayetano, one of President Rodrigo Duterte’s most outspoken defenders at the Senate, told reporters on Wednesday, May 10, that he will talk less once he is DFA chief.

“Actually, the bigger challenge for me now is if politicians like microphones. Diplomats should not engage in microphone diplomacy,” Cayetano said in a media briefing in Phnom Penh, Cambodia, on Wednesday.

Microphone diplomacy refers to the use of publicity, often the media, to address or engage other countries.

In 2015, for instance, a Chinese diplomat blasted the US for “resorting to microphone diplomacy, or pointing fingers at each other,” to settle differences over the disputed South China Sea, according to Reuters.

Cayetano made his remarks about “microphone diplomacy” hours after President Rodrigo Duterte on Wednesday announced that the senator is the next DFA chief.

In his media briefing on Wednesday, Cayetano explained that he cannot take his post at the DFA until the Commission on Appointments (CA) confirms his nomination. Until then, he remains a senator.

When Congress is in session, as it is now, a presidential nominee can only take his or her oath of office once the CA has given its consent. This is according to the CA rules based on the 1987 Constitution.

Cayetano’s predecessor, Perfecto Yasay Jr, was appointed while Congress was not in session, thus it took effect immediately based on CA rules. The CA eventually rejected Yasay for lying about his US citizenship.

Once Yasay was rejected, Foreign Undersecretary Enrique Manalo, a career diplomat for nearly 4 decades, took his place in an acting capacity.

‘Much, much less’ words as DFA chief

On waiting for the CA to confirm him, Cayetano also pointed out, “It’s also the way of the President and myself to give respect to the CA because I’m a CA member.”

Cayetano said that after his CA confirmation, “you’ll hear more from the spokesman and much, much less from me, because we will not use microphone diplomacy.”

Cayetano also said he wants the DFA to focus on a mission “to follow the policy of the President” and “to keep building bridges.”

“We have the best people in the DFA but suddenly we’re relevant around the world. Suddenly, the Philippines is no longer just a speck that is a very small player in world affairs,” he said.

With this in mind, Cayetano said that “the DFA, from the secretary down to the most humble employee, will not have their own agenda or their own foreign policy, but we’ll all work hard together to implement the foreign policy of the Philippines, led by the President.”

On Monday, May 8, Cayetano got a taste of representing the Philippines in the global sphere when he defended Duterte’s war on drugs before United Nations (UN) member states. (READ: Human Rights Watch slams Cayetano for defending ‘the indefensible’)

On his presentation there, Cayetano on Wednesday said he is “willing to resign, to be jailed, to be exiled” if he presented the wrong information or “intentionally misled anyone” at the UN Human Rights Council’s Universal Periodic Review. – with reports from Camille Elemia / Rappler.com