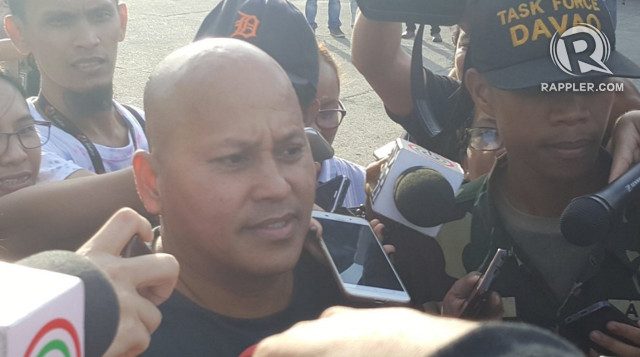 MANILA, Philippines – A day after he said he was open to a Senate bid in 2019, Philippine National Police (PNP) chief Director General Ronald dela Rosa urged the public not to take his words “seriously” as he really wants to “relax” after he retires next year.

“Please do not take it seriously, because Karen Davila was just insistent on me running,” Dela Rosa said in a mix of English and Filipino in an interview in Camp Crame.

In that interview, the PNP chief said, when asked about running for senator in the 2019 elections, “If I could be of help to the country by being a senator, why not?”

On Friday, Dela Rosa downplayed his supposed political ambition, at least for now. “I have no plans…of becoming a  senator. Wala pa ‘yan sa plano ko (That is not yet in my plan).”

Dela Rosa said that when he reaches the mandatory retirement age of 56 in January 2018, he will go back to Davao del Sur, the province he calls home, and go “fishing.”

(I get too much stress from being PNP chief, and then you’ll add [the stress] of running for senator. I will relax.)

However, Dela Rosa is not closing the door to a government position after he leaves the PNP, saying that he is “open to all.”

Dela Rosa said that because he “owes [Duterte] so much,” he is likely to follow the President’s wishes if he tells him that he should continue to serve the government after retirement.

He has been with Duterte since the end of the Marcos regime in 1986, back when he was a lieutenant and Duterte was acting vice mayor. They have been through a lot together. (Read: Duterte’s ‘Bato’: Who is Ronald dela Rosa?)