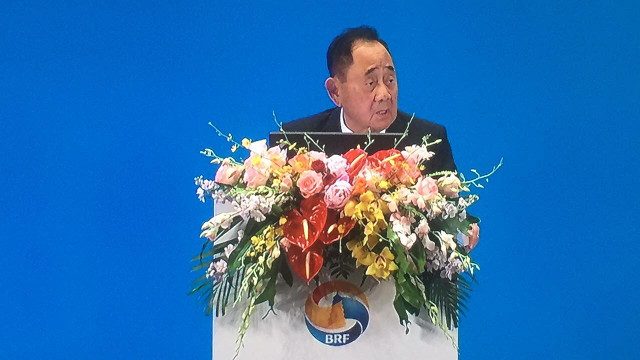 Special Envoy for Intercultural Dialogue Jose de Venecia Jr made this proposal in front of world leaders on Sunday, May 14, at the Belt and Road Forum, a two-day event hosted by Chinese President Xi Jinping himself.

De Venecia said on Sunday, “It is obvious as members of the ASEAN family that today, with China, we must find ways and means to jointly develop the area’s hydrocarbon potential to help lessen our common dependence on distant petroleum sources in the Middle East.”

To prove such a proposal already had precedence, De Venecia cited the Joint Marine Seismic Undertaking (JMSU), in which the Philippines, Vietnam, and China agreed to conduct joint explorations in the South China Sea.

The JMSU was signed by the administration of Gloria Macapagal-Arroyo in the early 2000s. Back then, De Venecia was speaker of the Philippine House of Representatives – a post he held under two presidents, from 1992 to 1998 and from 2001 to 2008.

The JMSU, however, was criticized for supposedly putting the Philippine government at a disadvantage since up to 80% of the JMSU site was inside the Philippines’ exclusive economic zone.

In 2008, a petition was filed against the JMSU before the Supreme Court.

Philippine Ambassador to China Chito Santa Romana earlier said the Philippines should push for better trade with China “knowing the lessons of the Joint Maritime Seismic Undertaking,” among other things.

De Venecia insisted, however, that joint development of the disputed sea would turn the South China Sea into a “zone of friendship.”

“Look at the potential for peace, excellencies, for the economic development in the heartland of the South China Sea,” he said.

“Small sea ports, airports, oil pipelines, small tourism townships, and fishing villages, in the spirit of the Silk Road, can rapidly rise in the contested areas once converted into a zone of friendship,” said De Venecia.

Toward the end of his passionate speech, De Venecia also proposed the addition of a 3rd route in China’s proposed 21st Century Maritime Silk Road, one of two components of the Belt and Road Initiative (BRI).

This 3rd route would encompass the 250-year-old Manila-Acapulco galleon trade route. Such a route could expand the 21st Century Maritime Silk Road to include Australia and Latin America.

Duterte and his delegation are already in Beijing for the two-day Belt and Road Forum. However, he did not attend the opening ceremony where Xi and other leaders gave speeches.

His first BRI event will be the welcome dinner on Sunday evening, to be held at the Great Hall of the People. – Rappler.com