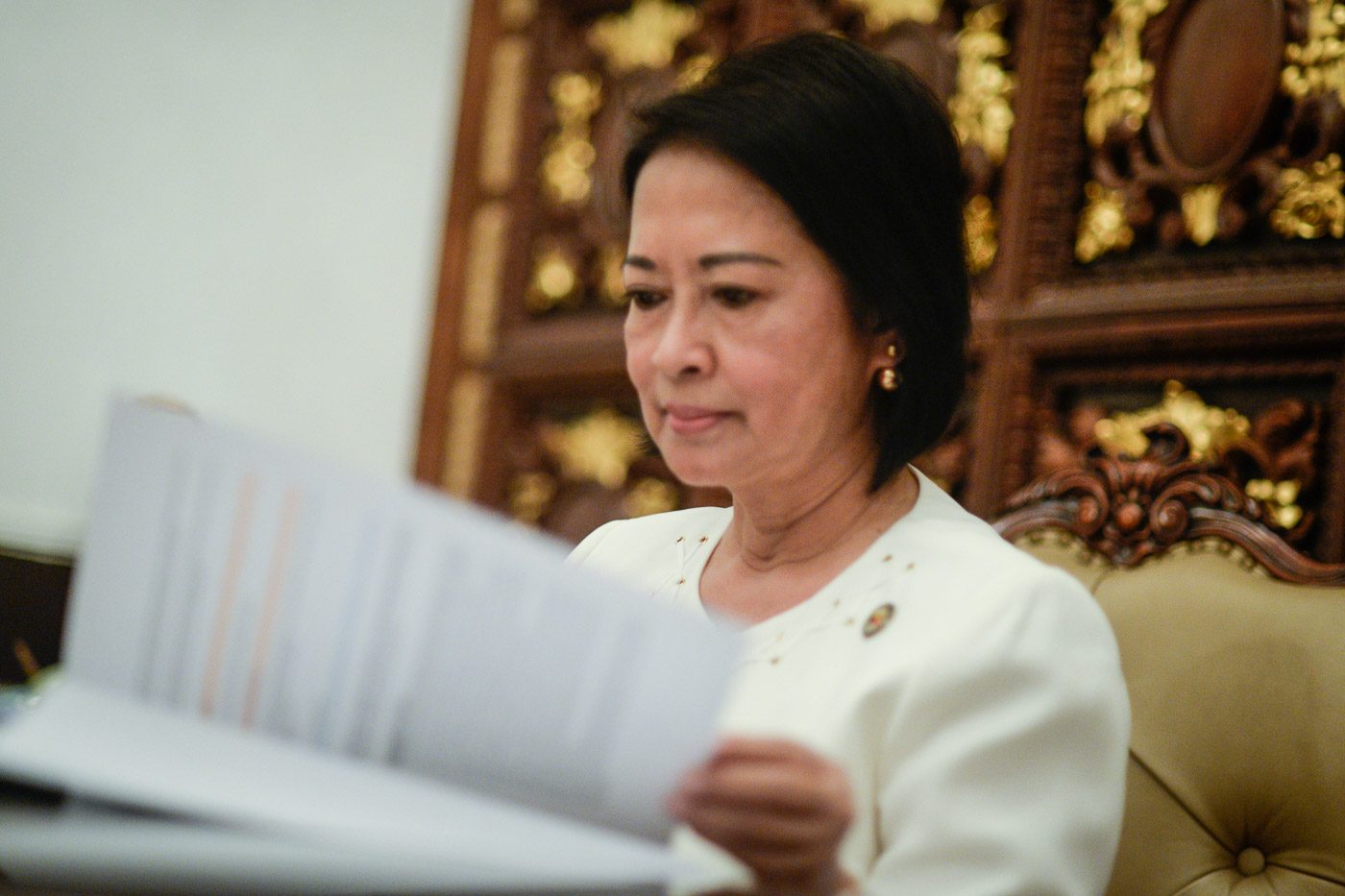 Facebook Twitter Copy URL
Copied
With more LP lawmakers possibly jumping ship to PDP-Laban, it may soon lack the minimum 24 members required to maintain its slot in the CA

MANILA, Philippines – Liberal Party (LP) member and Occidental Mindoro Representative Josephine Sato may soon lose her seat in the powerful Commission on Appointments (CA) if more of her party mates will jump ship to the administration party.

Sources from the LP are suspecting this is the plan of the House leadership after 5 former LP lawmakers joined President Rodrigo Duterte’s Partido Demokratiko Pilipino-Lakas ng Bayan (PDP-Laban) last week, reducing LP lawmakers from 32 to 27.

The House leadership gives a slot in the House contingent to the CA for every party that consists of at least 24 lawmakers, as explained by Majority Leader Rodolfo Fariñas on Wednesday, May 17.

“The computation for the CA is based on party representation. So, I computed it. The party has to have at least 24 members, so they are entitled to one seat. There are 292 of us. How many seats? Divided by 12,” said the Ilocos Norte 1st District representative.

“We’re just talking. They’re sweet-talking me and are saying, ‘If and when we need to transfer, can you be our sponsor?’ Of course they always ask me to be their sponsor so their entry will be faster. Many others are talking to me,” Fariñas said in Filipino.

But he clarified that PDP-Laban is not openly recruiting LP members, let alone pursue a supposed move to unseat Sato.

Sato is one of the more feisty CA members, throwing tough questions at Duterte’s Cabinet appointees during their appointment hearings. (READ: On the job with Congresswoman Josephine Ramirez-Sato)

She was relentless in grilling lawyer Perfecto Yasay Jr during his appointment hearing for the Department of Foreign Affairs post. The lawmaker wanted Yasay to categorically admit or deny previously owning a US passport. (WATCH: Rappler Talk: Josephine Ramirez-Sato on leadership under the Duterte administration)

She also quizzed Environment Secretary Gina Lopez on the latter’s technical knowledge of the law after she cancelled 75 mineral production sharing agreements in watersheds all over the country.

Fariñas said the LP lawmakers, like many of their colleagues from other parties, are the ones approaching him because of the upcoming 2019 midterm elections.

“We’re not pirating LP members. They’re applying to us…. Come on, it’s like you’ve not known how politics work. The elections are near. This is the midterm elections. The President is the head of the [PDP-Laban],” said Fariñas, a longtime politician.

“Of course, others there know the advantage of a party impact. We’ve seen since time immemorial, apart from the two-party system, that since the 1987 Constitution, the gravitation is towards whoever is the President,” he added.

The LP was a thriving party when its chairman Benigno Aquino III was president. Most of its members joined PDP-Laban, however, after Duterte won the 2016 polls. (READ: The Liberal Party and realpolitik in the House)

No reason to remove Sato

“I am certain that the other parties would not consciously raid our party just for the purpose of removing Cong. Nene Sato. She happens to be one of the most active members of the CA,” said Quimbo.

“It cannot be doubted that she has represented the HOR (House of Representatives) well as far as the proceedings of the CA are concerned with her incisive interrogatories of prospective candidates. For the record, she has always voted with the HOR delegation so I cannot see any other reason why she should be removed,” added the Marikina 2nd District representative.

He said, however, that LP cannot stop a member if he or she already wants to bolt the party.

“I’ve always believed that  a relationship between a member and the party is like a marriage. It must be consensual. You cannot compel one to remain against their will,” said Quimbo.

“In short, we can only appeal, but we cannot stop a member if they want to transfer to another party or not,” he added. – Rappler.com