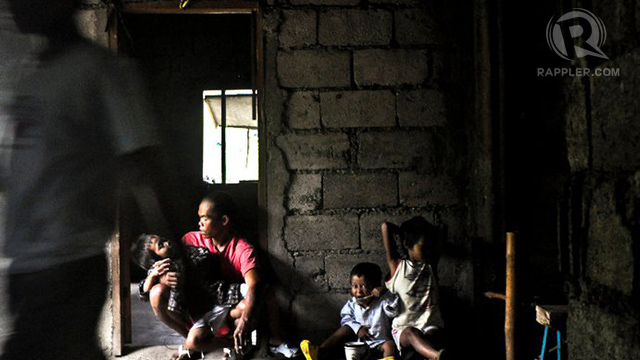 MANILA, Philippines – Poor Filipinos are the least optimistic about the next 12 months, according to the latest Social Weather Stations (SWS) survey released on Wednesday, May 17.

The results of the First Quarter 2017 Social Weather Survey held from March 25 to 28, first published in BusinessWorld, show that Filipinos are less optimistic about having a better life and an improved economy in the next 12 months.

In terms of expected change in their quality of life in the next 12 months, 43% of the respondents are “optimists” or they believe it will change for the better, while 6% are pessimists or think they will be worse off, for a net personal optimism of +36.

The March figure is an 11-point drop from the +45 net optimism in December 2016. Both figures, however, are considered “very high,” the classification used for net optimism from +30 up.

The March net personal optimism is the lowest since September 2015, when it was at +33. From that survey period until March, it ranged from +40 to +46.

Among socioeconomic classes, net personal optimism was highest in the well-off Class ABC (+37) and Class D (+38), and lowest in the poorest Class E, at +29.

Optimism dropped across all classes, but the biggest slide was in Class E – a 17-point drop from +46 in December.

Among geographical areas, the highest net personal optimism is in the National Capital Region (+43), followed by Balance Luzon (+37), the Visayas (+34), and Mindanao (+32).

The biggest drop in net personal optimism by area is in President Rodrigo Duterte’s bailiwick, Mindanao, falling by 21 points from +54 in December 2016.

This is 5 points lower than in December 2016, when net optimism in the economy was at +43. The March and December figures are both classified as “very high.”

In terms of geographical location, net personal optimism was highest in Mindanao at +49, followed by the National Capital Region (+39), Visayas (+34), and Balance Luzon (+33).

Asked about their quality of life in the last 12 months, 35% felt their lives improved, while 19% said their situation worsened, placing net gainers at a “very high” +16 in March – the same as in December 2016.

Malacañang attributed the lower net personal optimism in the first quarter of 2017 to the “pinch of inflation.” (READ: Inflation rises to 3.4% in March)

“Net personal optimism was registered at +36 which could be attributed to respondents feeling the pinch of inflation last March, following the increase in electricity cost due to the Malampaya maintenance shutdown and upward price adjustments in gasoline, diesel, kerosene, and LPG,” said President Spokesperson Ernesto Abella.

Abella added that the Duterte administration is working on “bringing prosperity to all” through programs for the poor and marginalized.