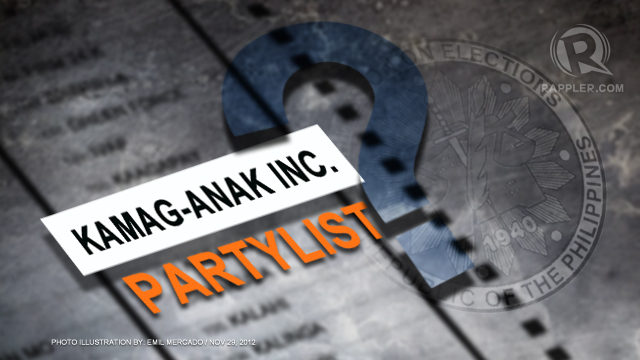 The Commission on Elections (Comelec) will allow 79 groups to run in the 2013 party-list race. The groups comprise less than a third, or 27%, of the original 289 applicants for 2013. But here’s the catch: 13 organizations whose nominees come from the same families were part of those accredited by the poll body. They include Ang Mata’y Alagaan (AMA), whose first 3 nominees upon application are members of Supreme Court Justice Presbitero Velasco Jr’s family. Also on the list is Ako Ang Batang Sora Movement, Inc. (ABSI), which counts 3 relatives of Quezon City congresswoman Mary Ann Susano among the party’s 5 nominees. The Constitution created the party-list system to give the marginalized a voice in the legislative process. But powerful and well-connected parties have made their way to the system, prompting the Comelec to conduct a “purge,” which did not please everyone.