MANILA, Philippines – The Philippines and China will hold their bilateral talks on the South China Sea territorial dispute from May 18-20 in Guiyang, China.

The bilateral mechanism, which President Rodrigo Duterte supports, is a departure from the multilateral tack adopted by the administration of then President Benigno Aquino III. The shift is seen as a way of kowtowing to Beijing’s demands, as the superpower has always insisted that the South China Sea conflict should be addressed bilaterally.

One of the flashpoints in the conflict between the Philippines and China was the Scarborough Shoal standoff which lasted from April to June 2012. Eight Chinese vessels surrounded the shoal, which is 198 kilometers west of Subic Bay, and the lagoon within it, blocking the entry of Philippine vessels. (READ: 2012 Yearender: PH, China, and Scarborough Shoal)

Onboard one of those vessels – MSC-3008 – is Captain Roy Cuesta of the Bureau of Fisheries and Aquatic Resources (BFAR). MSC-3008 went to Scarborough Shoal (which Filipinos call Bajo de Masinloc or Panatag Shoal) on May 26, 2012, to deliver provisions to the BRP Corregidor, one of the ships of the Philippine Coastguard.

Cuesta, now 56 and captain of the MV DA/BFAR research vessel which this time around will sail to Benham Rise, recounts to us the ordeal.

Did you expect that Chinese vessels will block you?

(We already expected it. We are always expecting it because they already blocked Filipino fishermen. The purpose of blocking us is to say that that no Filipino should go to Scarborough Shoal so that they [the Chinese] can control it. But when we had to go there one time, we insisted that we should be able to go inside because that was really our purpose, but then they blocked us.

And then at the entrance was their 8th vessel, which was around 50 meters long. And then there was a Chinese fishing boat; they put a rope by the entrance. Fortunately, when we maneuvered, the rope they placed was cut from the vessel and veered towards the side nearer to us.

There were two ropes. The purpose was to entangle our propeller, which didn’t happen. When we maneuvered, the rope was pulled away from the entrance, hence we were able to go inside. We were able to evade the huge ship that blocked the entrance). 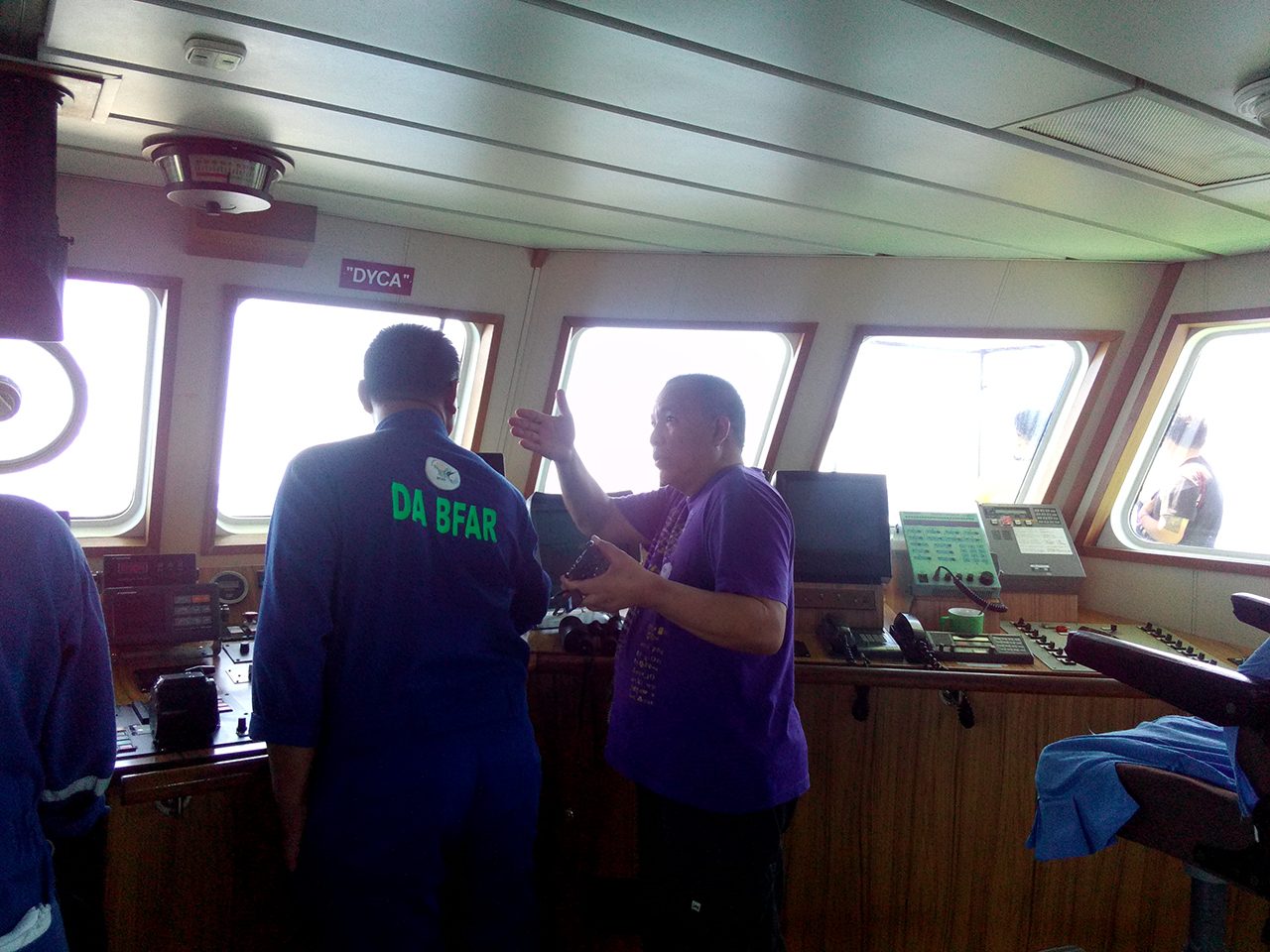 What did you feel when you were able to enter the shoal basin?

(During that time when we were able to go inside, we felt nervous of course. Anytime, in an instant error of maneuver, we may figure in an accident. Inside the lagoon, it’s shallow water and purely stone).

How long did you stay inside the lagoon before you had to leave?

(Seven days. We stayed inside the lagoon and after that we have to leave, another boat which is the same size as ours will replace us. I can say that that was a dangerous maneuver. When we were able to go inside, they blocked the lagoon, we couldn’t get out. The Chinese have by then stationed 6 fishing boats, they placed a buoy and there were 3 piles of rope).

You were trapped inside. What was your state of mind then?

So okay, normal but we are thinking of how to go out that time.

(Actually the coast guard commander talked to the Chinese vessel, the person concerned, if we can get out peacefully; without any hassle. The Chinese agreed but they said if go out, we should never return.) Did you acquiesce to what they want?

(The Philippine Coast Guard faced a huge dilemma. One of the options is that we – the people inside, will go out through a rubber boat, we will be ferried out and replaced by another set of personnel. Those who will replace us, their boat will be left outside, then we will take shifts with them, we will go to and fro using a rubber boat. The personnel from 3008, us, will move to the 3001 vessel, then the 3001 personnel will go to 3008. The 3008 vessel will be left inside the lagoon.

But this did not happen. That is another plan. Supposedly, 3001 will enter but because the tension was high already, the Philippine Coast Guard did not insist on it. We left but there were vessels which stayed behind in Scarborough Shoal, the MSC 3001 and the SAR vessel of the coast guard. Then the next time when we came, we weren’t able to go inside anymore.

We stayed outside the lagoon and during that time that, a typhoon came because it was already June).

Was there a time when you feared that you will not see your loved ones again?

(On my part, since I am a civilian, I’m not part of the Philippine Goast Guard, I was aware of the situation. What now, I’m caught in the crossfire).

Did it cross your mind that this may be your last voyage?

(Yes it did, it did, but I was already there. It was my job. This was part of my work).

After that experience, do you think you can still go back to Scarborough Shoal?

(I have no issue with that. As long as you’re asked to go there by the office, you have to follow orders. When they tell you have to go, I will still go as long as there will be no trouble. Now, if we will risk our lives, that will be difficult. I’m a civilian, not a military personnel. All I want is for things to be peaceful). – Rappler.com