The centenarians of Narvacan 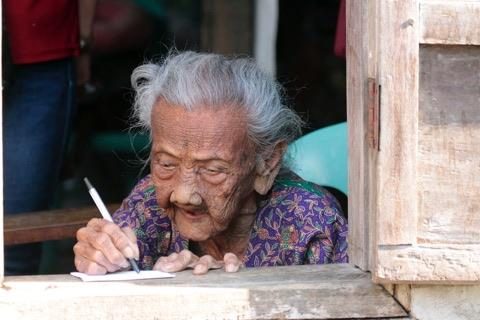 Facebook Twitter Copy URL
Copied
There are 9 residents of Narvacan, Ilocos Sur, who are 100 years or older. They are all women, and here are the secrets of their longevity.

All photos by Mau Victa

ILOCOS SUR, Philippines – Emilia Viloria Cabotage of Aquib village in Narvacan celebrates her birthday Sunday, May 28. Residents of her entire barangay are invited to a party. The mayor, Zuriel Zaragoza, has promised to bring her a cake. She’s turning 104.

Emilia is not the only centenarian in Narvacan. There are 8 others. All of them are women.

The oldest of centenarians is Faustina Cabigon Montes from Barangay San Pablo. She was born on January 16, 1912, making her 105 years old.

Faustina used to stay alone in a hut beside the house of her daughter, but Typhoon Lawin in 2016 destroyed it. She now stays in the sala of another child’s house.

Lilia, her 64-year-old daughter, said that Faustina eats mostly vegetables – her favorite is squash – but she also eats meat and sips an occasional soft drinks.

Faustina is a very pious person. She, however, has lost her vision for the past 5 years, and Lilia has to constantly watch over her.

Also blind is Emilia Viloria Cabotage of Barangay Aquib. She is being cared for by her single daughters Emerencia, 72, and Rosalina, 75. Emilia also has two dogs to guide her and a favorite cane made of twisted guava branch.

She is also a pious woman and eats mostly vegetables. She also indulges in an occasional soda drink to make her burp. She has stopped smoking native cigars. Her favorite food is dried krill (small shrimps) soaked in a bit of water. Dolores Canosa Castro of Sulvec was born on June 7, 1916. Lola Dolor is mostly in her wheelchair; otherwise, she would just crawl.

She eats anything, and her favorites are tinola and lomo-lomo, an Ilocano soup made of pork and innards.

She is cheerful and often speaks unintelligibly in a sing-song manner. A daughter who is a nurse in Germany comes home every year to visit her.

Felicidad Cabuena Cabuena of Rivadavia village is the only spinster among the centenarians of Narvacan, but her house is full of pictures of her nieces and nephews whom she helped send to school.

Born July 15, 1916, Felicidad is the eldest of 4 children. She was said to have been a diligent and industrious woman in her prime.

Up to now, she goes up the stairs to have her meals. In an upper room, she keeps tight watch of her beloved lakasa or drawer, one of her great-granddaughters said.

She eats only vegetables, and her favorites are string beans and winged beans. Francisca Cacas Cabe, according to social welfare officer Alcain, has the regal bearing of Gloria Romero when she first saw her.

Lola Kikay was born on July 18, 1916, in the village of San Antonio, which she never left. Alcain said that she used to see her regularly in church.

Perla Cabe, her only daughter-in-law, said Lola Kikay’s husband died when her son Remigio (Perla’s husband) was only 7 months old in 1948. Lola Kikay raised her only child through dressmaking.

Now, other than Perla, Lola Kikay’s two apos, who are nurses, take care of her. She used to eat only vegetables, but now has gotten tired of that and likes only meat broth like sinigang.

She has wanted to have a wheelchair, but also wishes to be more active physically.

Calixta Pilotin Sabalo, who was born on October 14, 1916, did not need to have a strict vegetarian regimen to reach her 101st birthday. Seven of her siblings are still alive. Their eldest will be 103 years old in July.

All the Pilotin family are based in Tay-ac in Bantay town. Calixta got married and is now staying in Cagayungan village, where her son is the barangay captain.

Like Faustina and Emilia, Calixta got blind, but she was operated on early and now can see barely. One of her daughters said that after she went to the Poblacion last November to get her longevity prize of P15,000 from the province and P10,000 from the town, she decided not to rise from her bed.

Unlike many of her fellow centenarians, however, she still has a sharp sense of hearing and can talk and talk intelligibly. She even knew the names of her living sibling and sang, while lying, “O Naraniag a Bulan (O How Radiant is the Moon)” to us.

She subsists on vegetables, Ensure, and a little Coca-cola. “Nagrawet (voracious),” her daughter said of Calixta. Like Faustina, Quintina Masulit Sabalo used to live alone at the back of her daughter’s house in San Antonio, but Typhoon Lawin also destroyed her house last year. She grudgingly agreed to stay in the huge house.

Her daughter said that when she stayed in, she made sure that all the lights are turned off at night to save on electricity.

Quintina’s name came from the nearby town of San Quintin, Abra, where she came from. She was the youngest of 8 and was born on Halloween in 1916.

Quintina is a cheerful woman and loves playing with her apo sa tumeng (great-grandchildren). One of them makes sure that Lola Quintana gets to bathe every morning. Lola is not particular about her food, but she loves longganiza. She also loves listening to the radio.

The other Narvacan centenarians are Isabel Caducio Bañez from Margaay, who was born on June 20, 1916; and the youngest, Andrea Cabero Callejo of San Pedro, who was born November 16, 1916.

Alcain said there are 3 Narvaceños who will soon be joining their ranks as they will be celebrating their birthdays this year. Narvacan Mayor Zaragoza said he wanted to know the secrets of longevity of these amazing women, and he has so far found these:

Most of them have long ears, which, according to Ilocano superstition, indicates long life. Faustina, Emilia, Francisca and Quintina have extremely long ears.

They thrive on a vegetarian diet.

The observe moderation. Some of them love to drink soda once in while, but no one mentioned alcohol. Some, however, used to smoke those huge Ilocano cigars.

There is less stress in the countryside. Vigan City, which has a bigger population, has only 3 centenarians, while the other city, Candon, has 4. Women live longer lives. The World Health Organization in 2015 said that the Filipino men’s life expectancy is 65.3 years while that of women is 72 years.

Being Ilocano is also crucial. The Ilocos region has the biggest proportion of senior citizens at 16.6% of the total population. Second biggest is Region VI at a distant 7.9%.

Faith. Many of the Narvacan centenarians are religious, as they say faith has sustained them and that God has a purpose for them.

A loving family. All of the centenarians are surrounded by their children and their grandchildren. Even the spinster Cabuena have not only her relatives but her neighbors as company. And her loving nieces and nephews come home to Narvacan to visit her.

Being active. Although many of them are already sedentary, in their prime these women said that they liked to move around. Almost all of them were farmers and kept a clean lifestyle. It’s not about being rich but being fit.

But being centenarian is not all fun. Mayor Zaragoza asked Emilia about her birthday wish, and the answer was: for Santa Maria to take her already. It’s been dark for a long time, and she wanted to see the light, he quoted her.

All the mayor could assured her of is that the P100,000 bonus promised by the government will arrive for her birthday. And there would be a cake, balloons, and her favorite Pop Cola. – Rappler.com