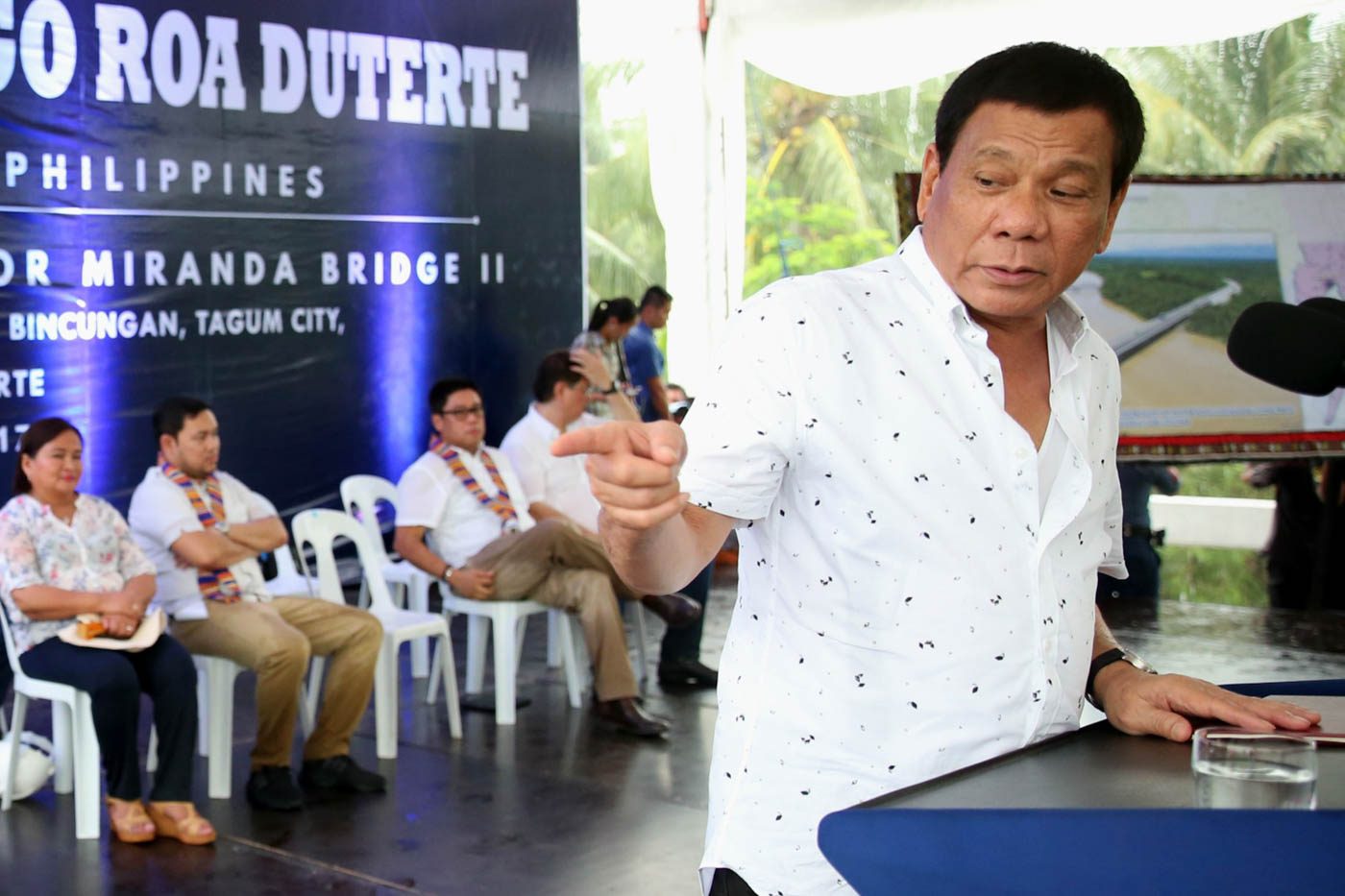 MANILA, Philippines – In another rage-filled outburst against ABS-CBN, President Rodrigo Duterte announced that he will file charges of “multiple syndicated estafa” against the television network.

“I’m telling you now, I will be filing charges of multiple syndicated estafa,” he said in his speech at the launch of housing designs for the military and police in Davao City on Friday, May 19.

He quickly followed this up with a slew of curses: “Kawalang hiya ninyo, kapal ng mukha ninyo, putangina ninyo leche kayo (You have no shame, your faces are too thick, you sons of bitches).”

At the start of his rant, he addressed ABS-CBN chairman Eugenio “Gabby” Lopez III.

“Gabby Lopez, I paid ABS-CBN P2.8 million….You accepted my money, you never bothered to show my propaganda (political advertisements). After the elections, you didn’t return the money,” said Duterte.

The President claimed political advertisements of other candidates met the same fate. These candidates include his running mate, Foreign Secretary Alan Peter Cayetano; and Senator Francis Escudero, a vice-presidential candidate.

Duterte had earlier vowed to block the renewal of ABS-CBN’s 25-year legislative franchise which grants it the right to operate as a broadcasting firm.

Its current franchise will expire while Duterte is still in power. House Bill 4349 seeking to renew the franchise is still at the committee level. (READ: ABS-CBN franchise not for urgent renewal, clarifies lawmaker)

The day Duterte was giving his speech, ABS-CBN held a briefing for its investors in Makati.

Duterte spurned “press freedom” as a shield for ABS-CBN, saying the network’s act of supposedly “stealing” from politicians like him means they had it coming.

He said it was his “constitutional right” to express his anger against media.

“Us, how about our freedom? We have our freedom of expression to express our anger and that is also my constitutional right. You are bullshit,” he said.

After another slew of insults, he ended his speech abruptly by saying: “You want to know my sentiments? Fuck you. Salamat (Thank you).”

Lobbing insults and threats against media outfits has been a fixture in recent speeches of the President.

In particular, he has called out ABS-CBN and the Philippine Daily Inquirer. While initially he pointed out their supposedly biased news, he eventually began targeting their owners, the Lopez, Prieto, and Rufino families.

Both media outfits have denied allegations of unfair or inaccurate news. – Rappler.com