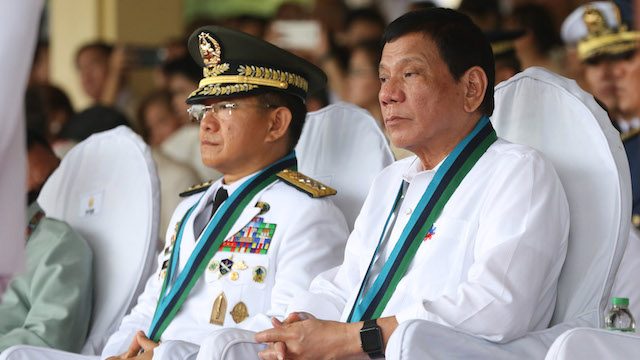 MANILA, Philippines – If battling insurgencies has taught Armed Forces of the Philippines (AFP) chief General Eduardo Año anything, it’s that one needs to focus on “root causes” to solve complicated problems.

That’s why when he takes over the powerful Department of the Interior and Local Government (DILG) come June 2017, Año wants to “focus on the drug syndicates” in President Rodrigo Duterte’s popular but controversial war on drugs.

(You need to go to the source itself. Like when handling insurgencies, you have to focus on the root causes. It’s the same in the war on drugs, we’ll work together to address that.)

Año also said he wants to make sure the Philippine National Police (PNP) wages a war on drugs that “uses and follows the rule of law.”

Año is set to retire early from military service because Duterte wants him to take over the DILG portfolio by June 2017.

The DILG has administrative supervision of the country’s local government units and public safety bureaus, including the PNP.

While under the law, the Philippine Drug Enforcement Agency (PDEA) is the lead in all anti-drug efforts, it’s the PNP that’s provided most of the muscle in Duterte’s drug war.

Police have in place Project Double Barrel, which targets both street-level users and pushers through Oplan TokHang and bigger fish through Project High-Value Target.

The PNP, however, has been criticized for supposedly only targeting the poor and failing to nab high-value targets such as drug lords and drug protectors.

“Kailangan kasi simultaneous ‘yung pag-address sa problema (We need to address these problems simultaneously),” Año said, when asked if he thought existing PNP and PDEA efforts against high-value targets were not enough.

He added: “Meron naman silang program diyan. Baka kailangan natin i-review (They have existing programs. We might just need to review those).”

Año’s appointment to the Cabinet post was a surprise to many, including the 4-star general himself. Duterte made the announcement when he was pressed on his pick to lead the DILG.

He will be the first former military man to occupy the DILG post since the late Angelo Reyes, who headed the department under the Arroyo years.

While both the DILG and PNP are civilian agencies, many of its top leaders are graduates of the Philippine Military Academy like Año. DILG officer-in-charge Catalino Cuy and PNP chief Director General Ronald dela Rosa are also graduates of the academy.

Asked if the transition from a military to civilian organization, particularly one that handles LGUs, would be difficult, Año said he was unfazed.

“Ever since I was a lieutenant, we were already working with other government agencies, including the local governments,” he told reporters. – Rappler.com