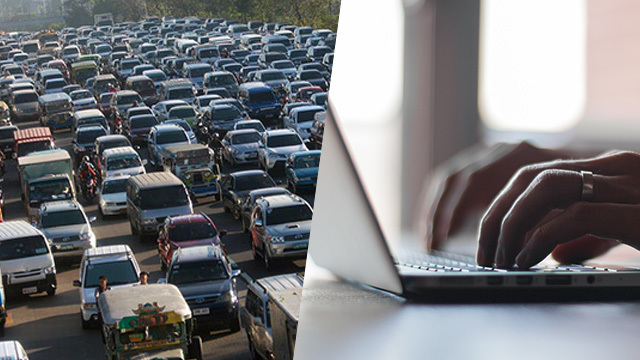 MANILA, Philippines – Voting 22-0, the Senate on Monday, May 22, approved on final reading a bill ensuring the protection of home-based workers and allowing the “work from home” policy to address the traffic crisis in urban cities.

Senate Bill 1363 or the Telecommuting Act of 2017, authored by senators Joel Villanueva and Cynthia Villar, defines “telecommuting” as the partial or total substitution of computers or technology for the commute to work by employees.

Villanueva clarified that under the bill, companies would not be compelled to implement a “work from home” policy. They would instead be given the discretion on whether or not to offer telecommuting to their workers.

If the measure is passed into law, it is seen to help ease the worsening traffic situation in cities.

A counterpart measure has been filed in the House of Representatives but it is still pending in the committee level. Before the measure becomes a law, the House has to approve the bill on 3rd and final reading.

Villanueva, chair of the Senate committee on labor, employment, and human resources development and sponsor of the measure, said the bill also seeks to protect the rights of home-based workers for equal pay, leave benefits, and promotion as their office-based counterparts.

Citing a 2014 study by US software company VM Ware Incorporated involving corporations with at least 500 employees in the Philippines, Villanueva said 70% of respondents claimed they were more productive and creative when working “on the go.” Around 93%, he added, said they used smartphones for work while 73% said working from home was ideal for them.

Villanueva also cited a report from the Employers Confederation of the Philippines showing there is “growing acceptance” of telecommuting in workplaces such as Meralco, SGS Philippines, Metro Pacific Investments Corporation, and Aboitiz Equity Ventures.

Villanueva explained that if a company decides to enforce a “work from home” policy, the bill mandates that any program should meet minimum labor standards set by law and that employers guarantee equal treatment for home-based and office-based workers.

“Employers must ensure that measures are taken to prevent the telecommuting employees from being isolated from the rest of the working community in the company,” Villanueva said.

“The employers should also be responsible for taking the appropriate measures with regard to software to ensure the protection of data used and processed by the telecommuting employee for professional purposes,” he added. – Rappler.com