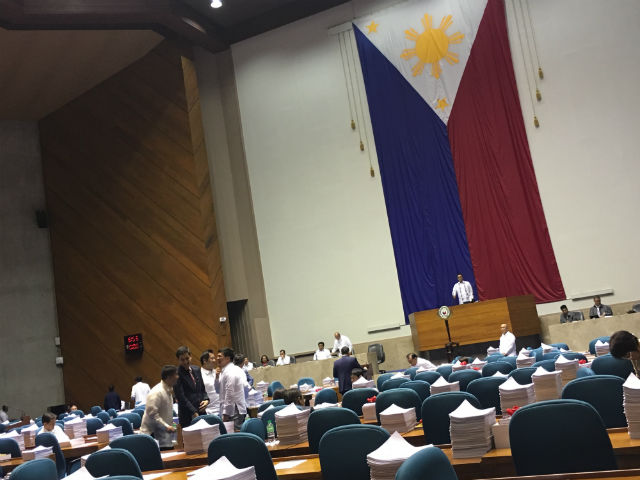 MANILA, Philippines – Plenary debates on the first batch of tax reforms kicked off at the House of Representatives on Tuesday, May 23, after two lawmakers delivered their respective sponsorship speeches for House Bill (HB) Number 5636.

House ways and means committee chairperson Dakila Cua and Nueva Ecija 1st District Representative Estrellita Suansing said the tax reforms being proposed by the administration of President Rodrigo Duterte will be beneficial to Filipinos in the long run.

This is because Cua is estimating that a total of P157.2 billion in government revenues will be generated from the tax reform package in its first year of implementation alone. (READ: Duterte’s tax reform: More take-home pay, higher fuel and auto taxes)

(First is to lower the personal income tax of our countrymen to increase their disposable income and increase their budget for their family’s needs.)

He added that the revenue to be generated from the tax reform package will be used to fund social welfare programs, infrastructure, education, healthcare, and job generation, among others.

Under the measure, the maximum rate of personal income tax will be reduced over time from the current 32% to 25%, except for high income earners.

Those earning P250,000 or below annually will be exempted from paying income taxes. The mandated 13th month pay up to P82,000 as well as other bonuses will still be tax-free.

An additional P10 tax per liter of volume capacity on sugar-sweetened beverages and carbonated drinks will also be imposed.

According to Suansing, the taxes on sugar-sweetened beverages could generate as much as P47 billion annually, which would be used for various programs focused on sugar farmers as well as health.

Under HB 5636, 15% of the taxes to be collected from sugar-sweetened beverages will be earmarked for livelihood and farming assistance programs for sugar farmers.

The remaining 85% will be allotted for the Department of Health in “operationalizing and monitoring of non-tax measures that will prevent non-communicable diseases, including advocacy measures that will curb lifestyle-related risk factors.”

Suansing said taxes from sugar-sweetened beverages will also be used to fund school-based feeding programs and provide potable water in public places. Part of the revenue will also be set for establishing sports facilities and drinking water in public schools nationwide.

“Mr Speaker, distinguished colleagues, this measure is a bold step that will jumpstart the promotion of a healthier lifestyle and redound to the introduction of other non-tax measures that will practically rein in the incidence of overweight, obesity, and diabetes in the country,” said Suansing.

“With this proposed law, the government can fast-track the country’s development agenda and ensure that the fruits of economic progress trickle down to the poorest of the poor and the marginalized sectors,” she added. – Rappler.com