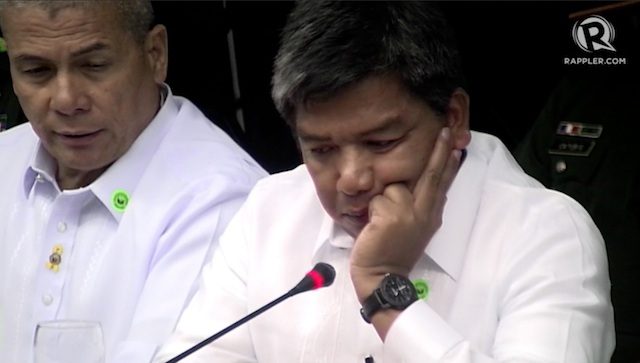 Facebook Twitter Copy URL
Copied
'Any group who sows terror and then dares to say that they do it in the name of Islam should be ashamed,' says ARMM Governor Mujiv Hataman

Clashes had erupted between the Maute Group and the military on Tuesday afternoon, causing residents to hide in their homes in fear and prompting President Rodrigo Duterte to declare martial law in Mindanao. (READ: TIMELINE: Marawi clashes prompt martial law in all of Mindanao)

“We strongly condemn these acts of terror committed against the people of Marawi City and swear to take immediate action as necessary,” said Hataman.

“Any group who sows terror and then dares to say that they do it in the name of Islam should be ashamed.”

According to the ARMM governor, even if Marawi is known as the “Islamic City” of the Philippines, “it is home to people of different histories, different beliefs.” With a population of more than 201,780 people, Marawi is the most populous city in the ARMM.

“That these acts of terror are happening in a diverse community bound by mutual respect and a shared commitment to peace is a travesty,” Hataman said.

He also noted that the attack took place just a few days before May 26 – the beginning of Ramadan, the month of fasting regarded as one of the 5 pillars of Islam.

“Any man who claims to fight for a just cause, yet dares to incite violence a few days before the Holy Month of [Ramadan] is a monster whose words belie his actions,” Hataman said.

The ARMM has been a region plagued by armed conflicts, which Hataman promised to put an end to when he was campaigning in the 2016 elections. (READ: What Mujiv Hataman’s reelection means for ARMM and PH)

‘Violence not the answer’

Meanwhile, Moro rights group Suara Bangsamoro warned the government against using force to deal with the Maute Group, adding that martial law is not the solution.

“Martial law will only worsen the heightening instability in Marawi City as it intensifies and [creates] fresh armed clashes between the state army and the Maute Group,” Suara Bangsamoro said in a statement.

Jerome Aba, national chairperson of the rights group, also said the declaration of martial law will only justify the urban militarization in Marawi City.

He then urged Duterte to look back on the Zamboanga siege, which had left lasting damage. (READ: Zamboanga still under siege)

“Our utmost concern is the lives and livelihoods of the civilians… [war] in this context is unnecessary and solves nothing.” – Rappler.com