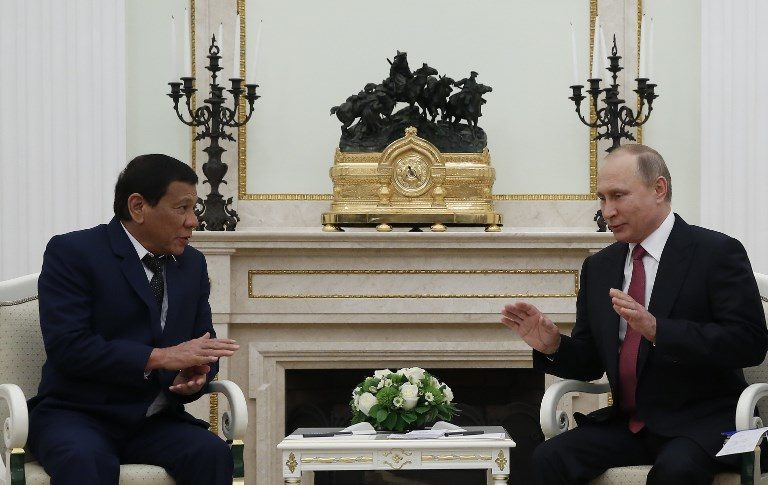 MOSCOW, Russia (UPDATED) – Russian President Vladimir Putin extended his condolences over the Marawi City attack in person to Philippine President Rodrigo Duterte during their bilateral meeting on Tuesday, May 23.

“I’d like to express my condolences because of the horrible terrorist attacks,” Putin told Duterte late Tuesday night, right before the Philippine President left for the airport. He spoke in Russian which was translated into English by an interpreter after each sentence.

Their bilateral meeting took place inside the Kremlin, Putin’s official residence in Moscow.  It had originally been scheduled to take place on Thursday, May 25 but was done hastily late Tuesday night.

“My colleagues and myself definitely understand quite well that you do have to come back to return to your motherland,” continued Putin.

He commiserated with Duterte over the lives lost during the attacks.

“Let me express hope that the conflict that you have just mentioned will be resolved as soon as possible and with minimal losses and casualties,” said Putin.

Before the Russian leader spoke, Duterte apologized for having to cut short his official visit to Russia.

“ISIS occupied a few provinces and there is still fighting going on. I have to go home and I should be there tonight. It’s an urgent matter,” said Duterte.

The Philippine leader had declared martial law in the entire island of Mindanao also on Tuesday night, following clashes between the military and the Maute Group, which previously pledged allegiance to the Islamic State. (READ: Martial law in Mindanao: Duterte’s warning fulfilled)

Putin had rushed back to Moscow from a nearby province when he heard Duterte had to fly home that night.

“I seized the opportunity to see you in person and I hope to talk about the bilateral and regional situation,” said Putin.

Putin also brought along 3 other Russian officials and an interpreter.

Right after their Kremlin meeting, Duterte and the 3 Cabinet officials headed straight for the airport for their flight to Manila.

Duterte thus cut his visit short by 3 days, leaving early Wednesday morning, May 24, instead of on Friday night, May 26. – Rappler.com