May 24, 2017 1:58 PM PHT
Rappler.com
Facebook Twitter Copy URL
Copied
Vice President Leni Robredo says the best thing to do now is to support the government as it fights terrorists in Marawi City 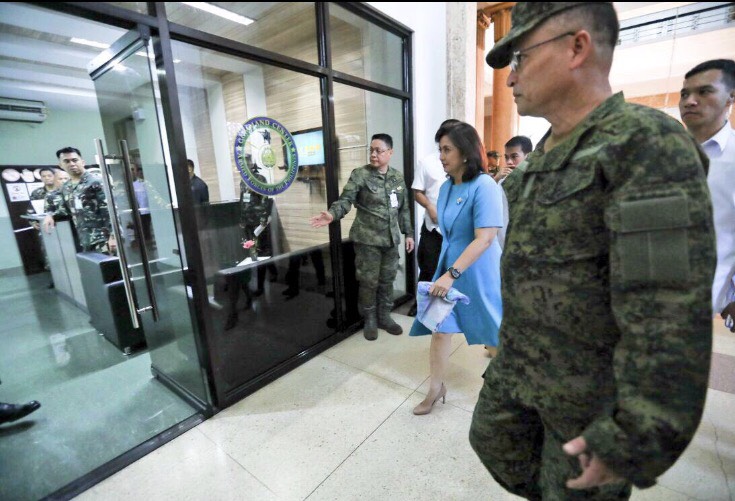 Robredo made the statement in a media interview after she attended a security briefing of the Armed Forces of the Philippines (AFP) on the situation in Marawi City on Wednesday morning.

Robredo met with the military a day after President Rodrigo Duterte declared martial law in Mindanao, following the attack of the Maute terrorist group on Marawi City.

“For me, we should trust the soldiers; trust the AFP,” she added. (READ: Marawi mayor to gov’t: Uphold human rights of ‘innocent civilians)

A human rights lawyer, Robredo has been vocal about her stance against the return of authoritarian rule to the country through martial law. Her earlier statements against martial rule, however, were in the context of Duterte’s supposed bid to amend the Constitution to make it easier for the Chief Executive to declare martial law.  (READ: Robredo: Threat of martial law ‘worst Christmas gift’)

Asked to comment on the decision to declare martial law in Mindanao, Robredo said on Wednesday that she asked the AFP leadership about the declaration during the security briefing. She said she was told that they were still waiting for the official document from Malacañang.

While waiting for the official proclamation, the Vice President said it would be “good” to support the government in its fight against terrorists in Marawi City.

(It’s better to be supportive at this point. Whatever the government does, it is what’s needed. Because our enemy here is not each other; our enemy here are terrorists.)

Duterte was due to arrive in Manila late Wednesday afternoon from Russia, where he had cut short his official visit. Presidential Spokesman Ernesto Abella, part of the presidential delegation to Russia, made the martial law announcement late Tuesday night.

No official martial law proclamation has been released since. Based on Abella’s initial statement, martial law will be in effect in Mindanao for 60 days, but Duterte also said that it may last for “a year,” if necessary.

Under the Constitution, a martial law proclamation is in effect for a maximum period of 60 days, but the President can extend it upon Congress approval in a joint session.

Meanwhile, Robredo urged the public to stay calm and to learn how to filter what they see on social media, as a lot of information going around social networks are false.

(It’s part of our responsibility to remain calm. There are a lot of information surfacing online that are not true and only cause alarm.) – Rappler.com