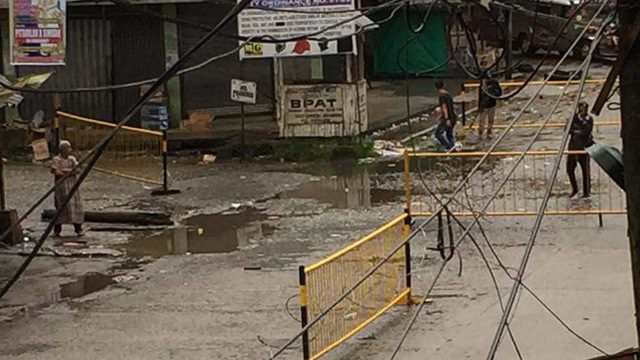 Facebook Twitter Copy URL
Copied
Members of the Senate and House of Representatives want authorities to explain what truly happened, with some saying local government officials might be involved

MANILA, Philippines – Senate President Pro-Tempore Ralph Recto, Senator Panfilo Lacson, and leaders of the House of Representatives minority bloc see a failure of intelligence in the Marawi attack that prompted the declaration of martial law in Mindanao.

Recto, in a text message, said “it is highly probable, well, for obvious reasons.”

Lacson questioned how the armed Maute Group was able to enter the area while police operations were ongoing against Abu Sayyaf leader Isnilon Hapilon.

The fatal Mamasapano incident in 2015 should have served as a lesson to authorities, Lacson also said.

House Minority Leader Danilo Suarez also questioned why authorities were unable to track the Maute Group and prevent it from attacking.

(This is an intelligence failure. Where are the PNP and the Armed Forces? Why didn’t they foresee this? The Maute Group is just small. They should have been tracking them already.)

House Deputy Minority Leader Alfredo Garbin Jr said it seems that the Philippine government and security forces had no clue, since even top defense officials were with President Rodrigo Duterte in Russia.

(Considering the fact that all of the heads – the secretary of national defense … were all there in Russia, so there’s a failure of intelligence. It seems they had no idea what would happen in Mindanao.)

But Senator Gregorio Honasan II, former military officer and now the chairman of the Senate oversight committee on intelligence funds, said it was a “failure of coordination.”

“This is our failure of our ability to coordinate, ‘yan dahilan parati (that’s always the reason). Siguro ‘yung nakakakita na may armadong grupo, [na] may nangyayari na hindi kaagad nag-report (Maybe those who already saw that there was an armed group or that something was happening did not report to authorities immediately.) That’s what we need to improve, enhance,” Honasan said.

He added that local government units (LGUs) have a central role to play because they are the “convergence points.”

(The most abused reason is failure of intelligence. We would again blame the military and the police but we must understand that local government units are the convergence points for this. The intel comes from the barangays, alleys, roads. We need to harness our information-gathering capability.)

He added: “Kung ‘yung pinakamakapangyarihang bansa nasisingitan, tayo pa?” (If even powerful nations are victimized by terrorists, how much more us?)

Senator Juan Miguel Zubiri, an ally of the President, echoed the crucial role of LGUs, saying some officials may even be cooperating with the Maute Group.

(Maybe Duterte saw that some LGU members are involved in the incident. It’s unfortunate to say this but that’s the truth. The terrorists can’t pass through barangays if the village chiefs and other LGU members don’t know about it.)

Both Lacson and Zubiri want authorities to explain what truly happened.

“But why did it happen again? But hazy pa ang reports (But the reports are still hazy). We really need to find out what actually happened before we give judgment,” Lacson said.

“That’s a start. Kailangan nila magpaliwanag bakit nangyari ito (They need to explain why this happened),” Zubiri said, adding that officials should explain to the Select Oversight Committee on Intelligence and Confidential Funds.

After the twin bombings in Quiapo last May 6, the Senate created the oversight panel to look into the use of the President’s intelligence funds, which rose by 400% to P2.5 billion in 2017 from P500 million the previous year.

Section 18, Article VII of the 1987 Philippine Constitution says that the President, as commander-in-chief, may “in case of invasion or rebellion, when the public safety requires it” suspend the privilege of the writ of habeas corpus or place the country under martial law. The writ safeguards individual freedom against arbitrary state action.

Crafted after the EDSA People Power Revolution that ousted the late dictator Ferdinand Marcos in 1986, the 1987 Constitution highlights the role of other branches of government in the martial law declaration. The provisions are meant precisely to prevent grave abuse and stop another Marcos from tinkering with civil rights.

Thus within 48 hours after the martial law declaration, the President shall submit a report “in person or in writing” to Congress. The declaration can also be revoked via a vote by Congress, now controlled by Duterte allies.

The Supreme Court may review the basis of its declaration. (READ: Martial Law 101: Things you should know) – with reports from Mara Cepeda / Rappler.com