Duterte ‘fires’ DDB chair: You do not contradict your own gov’t 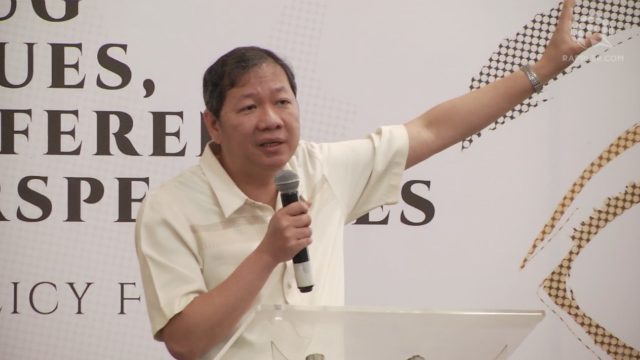 MANILA, Philippines – President Rodrigo Duterte on Wednesday, May 24, “fired” Dangerous Drugs Board (DDB) Chairperson Benjamin Reyes for “contradicting” the number of drug users in the Philippines.

During a media briefing after arriving from Russia, Duterte slammed the chief of the government agency tasked to craft strategies and policies on drug prevention and control, for giving a supposedly “wrong” figure of Filipino drug users.

“Here comes a chairman, you’re fired today, get out of service,” the President said. “You do not contradict your own government. If you are there, you’re just a civilian member of the board, you are not the implementer of the law.”

The “real” number of drug users in the Philippines has been widely contested in the last 11 months since Duterte took office.

Duterte, however, has been citing different numbers in his justification of his bloody anti-drug campaign. From the 3 million he often cited during the presidential campaign, the Philippine government now pegs the number of drug users at 4 million. (READ: Is Duterte’s ‘4 million drug addicts’ a ‘real number’?)

The President, during the media briefing, emphasized that former Philippine Drug Enforcement Agency (PDEA) chief Dionisio Santiago gave him the initial figure of 3 million drug users 5 years ago, adding that the “correct count [comes from] the police and PDEA.”

Rappler has reached out to Reyes’ camp but has been told that the DDB chief has no comment yet.

Reyes, who served as the board’s deputy director for operations before being appointed chairperson by Duterte, previously said during a drug policy forum that he would “not agree to any policy that will violate human rights and would neglect health issues.”

The problem of illegal drugs, he added, involves health as well as peace and order.

United Nations (UN) Special Rapporteur on summary killings Agnes Callamard said the proposed “balanced strategy” of the DDB in the fight against illegal drugs gave her “hope” that the government will carry out an alternative plan in the future. (READ: Callamard says PH drug board presentation gave her ‘hope’) – Rappler.com