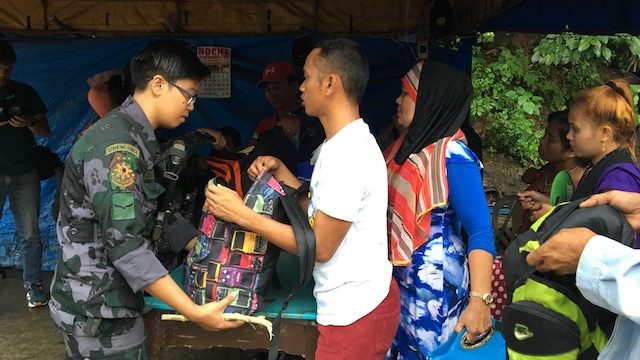 We’re coming to you from Iligan City in Mindanao. It is the first day of implementation of martial law which is prompted by clashes between troops and local terrorist groups in nearby Marawi City. What we’re seeing is the exodus of cars form Marawi City which is on normal days about a hour’s drive away. But this is not a regular day.

We’re here at a checkpoint and where all vehicles entering Iligan City are meticulously inspected by security forces. Passengers get off their buses so their bags are checked one by one. There’s a separate line for private vehicles, too.

Melissa Saavedra: It’s safer if there’s a checkpoint. But it’s also a hassle. They asked us all to get off the bus for additional safety purposes.

Traffic is massive. Our contact in Mindanao State University left Marawi City at 9 in the morning and did not reach Iligan until 4 in the afternoon.

Others who are desperate to flee the clashes, the black outs, and the panic that has enveloped the city opted to walk the long distance.

It is the first day of the implementation of martial law in Mindanao. According to Defense Secretary Delfin Lorenzana this means the  military will take over from the police law enforcement operations. There is suport for martial law but there are also concerns that it will trample on the rights of the public.

Ali Usman, MSU professor: It’s good so the civilians are protected, the rest of the population who do not want war. Martial law serve to discipline people who are planning to do terrible things in the city.

At this point, there are a lot of questions about the way martial law will be implemented here in Mindanao. But President Rodrigo Duterte is already threatening to expand the declaration to cover the entire country. If there’s anything we learned, he doesn’t make empty threats about martial law.