May 26, 2017 6:48 PM PHT
Rappler.com
Facebook Twitter Copy URL
Copied
President Rodrigo Duterte also says he has ordered Presidential Adviser on OFWs Abdullah Mamao to see if some of the terrorists are willing to 'talk peace' with him 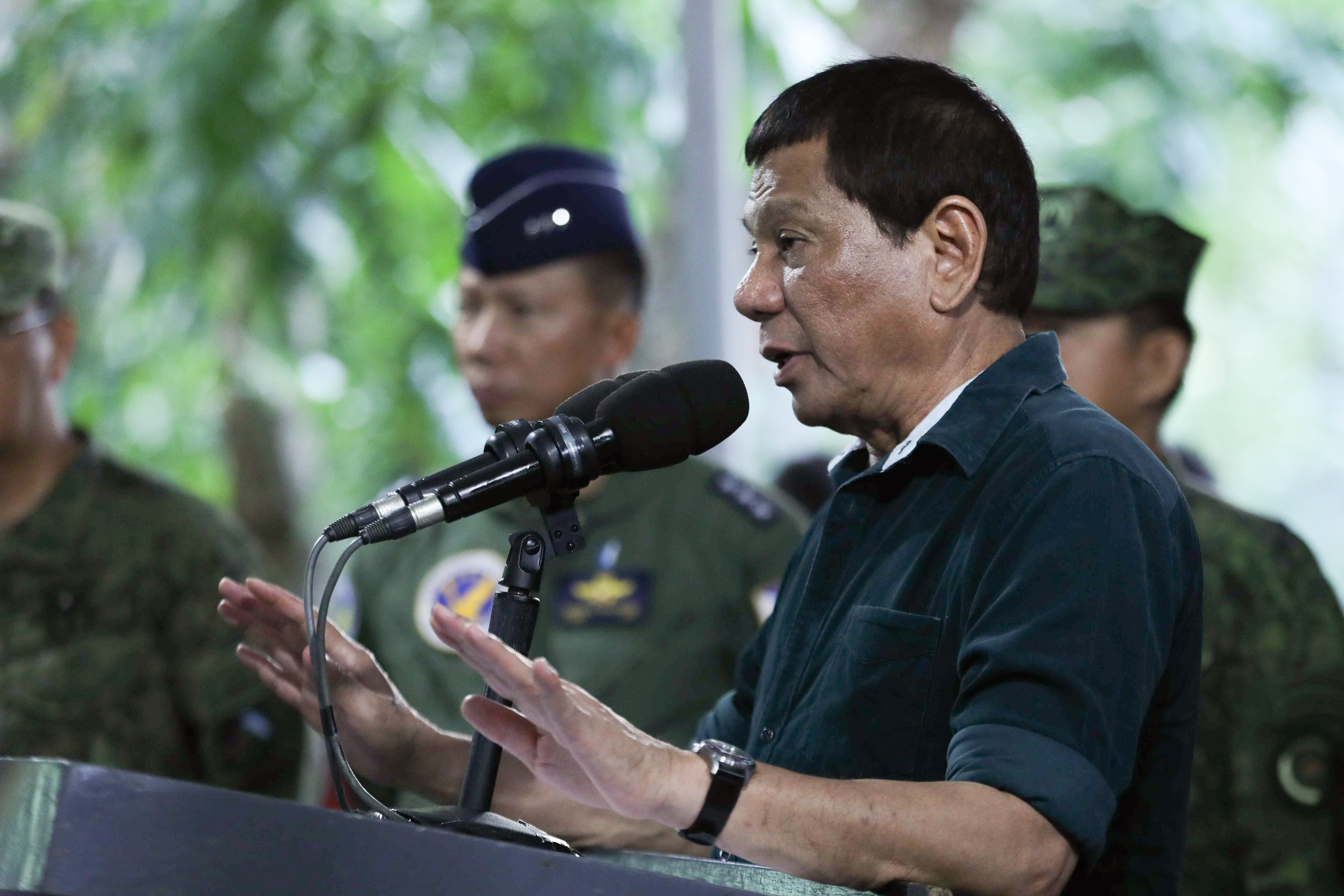 MANILA, Philippines – President Rodrigo Duterte on Friday, May 26, rallied government troops to win the war against terrorists in Mindanao, and assured them that he “alone” would be responsible for the “consequences” of his martial law declaration in the region.

Duterte addressed the 2nd Mechanized Infantry (Magbalantay) Brigade of the Philippine Army in Iligan City, Lanao del Norte, 3 days after he declared martial law in Mindanao due to the threat of the Islamic State (ISIS).

“Sasamahan ko kayo (I’ll be with you all the way). If you go down, I go down. But for this martial law and the consequences of martial law, and the ramifications of martial law, I and I alone would be responsible. Trabaho lang [kayo]. Ako na bahala (Just do your job. I have your back),” he said.

The President then joked that he would take the place of any soldier convicted of rape committed during martial law in Mindanao, amid concerns of human rights abuses during the period suffered by thousands during the Marcos regime, when many victims were tortured and raped.

“Ako na magpakulong sa inyo. ‘Pag naka-rape ka ng 3, aminin ko na akin ‘yun (I’ll take your place in prison. If you rape 3, I’ll take the blame),” said the President, who had sparked outrage during the campaign when he cracked a rape joke about an Australian missionary.

Duterte said his marching orders to the troops is to eliminate all those found carrying unauthorized weapons who “fight back.”

“Ang utos ko sa tropa, lahat ng tao na hindi authorized ng gobyerno na magdala ng baril at lumaban, patayin ninyo; ubusin na lang ninyo. Kasi ganoon din ang laban (My order to the troops is to kill all those who are not authorized by the government to carry firearms, who fight back; kill them all. Because that’s what’s going to happen anyway). They will come back to fight for another day,” he said.

He said he was “scraping the bottom of the barrel” to make sure the troops have everything they need to fight the terrorists.

“I am here to say to you, fight and I will pray for you and I will answer for everything. ‘Wag na kayo mag-alala (Don’t worry). During martial law, your commanders, you can arrest any person, search any house, wala ng (no need for a) warrant,” Duterte said.

The President said, however, that he was willing to “talk peace” with terrorists who are not hardliners and that he has directed lawyer Abdullah Mamao, Presidential Adviser on overseas Filipino workers, to send this “message” to the other side.

“But if they want to talk, mag-usap tayo ng kapayapaan (let’s talk peace),” he said.

Duterte reiterated that the government faces a “formidable enemy” in ISIS which, he said, wants to establish a caliphate in Southeast Asia spanning Mindanao, Indonesia, Malaysia, “and maybe Brunei.”

Duterte declared martial law in Mindanao on Tuesday, May 23, following clashes between the Maute Group and the military in Marawi City. He also said he may consider expanding the declaration to cover the entire Philippines. (TIMELINE: Marawi clashes prompt martial law in all of Mindanao)

The Armed Forces of the Philippines had promised to respect basic human rights of Filipinos in the implementation of martial law. The defense department issued guidelines to the AFP on Thursday, May 25. (READ: DND to AFP: Uphold rule of law, human rights in Mindanao)

Crafted after the EDSA People Power Revolution that ousted Marcos in 1986, the 1987 Constitution highlights the role of other branches of government in the martial law declaration. (READ: Questions you need to ask about martial law)

Under the 1987 Constitution, a state of martial law cannot override the function of both the judiciary and legislative branches of government. (READ: Martial Law 101: Things you should know)

People are also still entitled to their rights such as right to life as well as freedom from torture, warrantless arrest, and illegal detention. (READ: Hate human rights? They protect freedoms you enjoy)

The Constitution says martial rule should not initially exceed 60 days, and any extension has to be approved by Congress. – Rappler.com