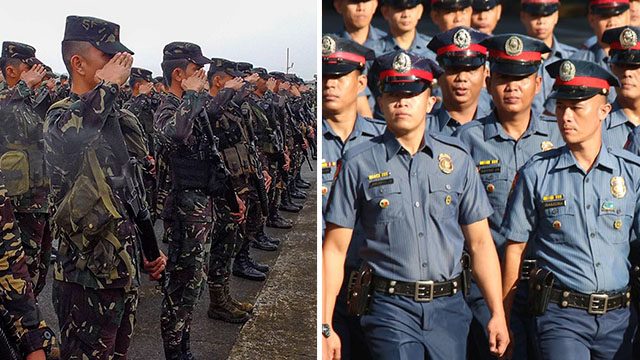 MANILA, Philippines— Soldiers were deployed to Quezon City on Friday, May 26, to help the city police as the National Capital Region Police Office (NCRPO) remains on “full alert” due to terror threats.

A total of 48 soldiers with K-9 units were assigned to conduct security operations with the city police as of Friday.

According to Brigadier General Jesus Mananquil, commander of the military’s Joint Task Force in the Natonal Capital Region (NCR), the soldiers will assist in implementing random checkpoints, security patrols, and police visibility operations.

Colonel Bartolome Bustamante of the QCPD Operations and Plans Division said they made this call in accordance with the NCRPO’s “full alert” status.

This comes after the clash in Marawi City that prompted President Rodrigo Duterte to declare martial law in Mindanao. (READ: TIMELINE: Marawi clashes prompt martial law in all of Mindanao)

When asked if the request was also in response to the start of Ramadan, he explained that “it is also a factor,” but clarified that they “are not targeting anyone in particular.”

In a press statement, Mananquil said that the military is “always in support of [the NCR police] as far as safety and public order is concerned in Metro Manila.” However, the military has yet to deploy soldiers to other cities of the region.

Even without military backup, other cities in the metro have already tightened security in their respective territories. (READ: Metro Manila cops ready for groups exploiting Mindanao crisis)

In Manila, the nation’s capital, police were ordered to double their deployment. In Makati, residents were assured that the financial center is running “business as usual” while cops conduct security operations.

Quezon City Mayor Herbert Bautista, NCR peace and order council chairman, has also urged other cities to follow suit and be wary of individuals who seek to exploit the situation in Mindanao. – Rappler.com