Dec 2, 2012 1:25 PM PHT
Facebook Twitter Copy URL
Copied
But it's an unlikely move for President Aquino, who did not include the bill in his priority list 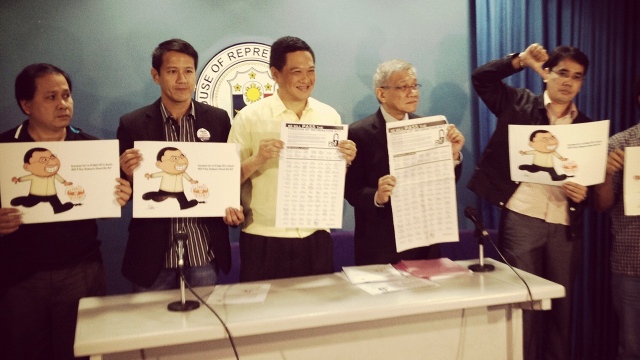 MANILA, Philippines – The advocates of the Freedom of Information (FOI) bill will fight until the end. They call on both houses of Congress to immediately tackle the bill in plenary, and urge President Benigno Aquino III to certify it as urgent.

“Given that time is running out in the 15th Congress, we appeal to the Senate and House leadership, as well as to the Executive, to accord its passage the urgency it deserves,” said the Right To Know, Right Now! Coalition in a statement released on Sunday, December 2.

“On the part of the Executive, President Aquino can certify to the necessity of its immediate enactment, as he did with the sin tax bill. This will place the FOI bill on par with the highest priority measures of Congress, and save it the delay from the interval of days needed in passing bills on second and third readings,” the group further said.

Congress will take its Christmas break in 3 weeks. With the campaign period coming up, attendance is expected to be a bigger problem when session resumes next year.

The House of Representatives is also expected to focus on the controversial Reproductive Health (RH) bill. President Aquino invited the members of the House to a luncheon on Monday, December 3, to appeal to them to put the bill to a vote.

Certifying the FOI bill as urgent is an unlikely move for President Aquino, who did not include the bill in his priority list.

The advocates of FOI have been upset with House committee on public information chairman Easter Samar Rep Ben Evardone for supposedly dribbling the bill. In spite the support of 117 House members for the bill, the committee failed to immediately schedule a vote.

No to Right of Reply

Some members of the House of Representatives have been pushing to add the “Right of Reply” to the FOI bill.

Right of Reply seeks to impose on media organizations to publish or air the side of politicians who have been put in negative light. What media groups find questionable is it aims to strictly specify how the follow-up story will be treated, which page of the newspaper it will be published, or how much time it will get in the newscast.

“We appeal to the proponents of the Right of Reply to allow the passage of the FOI. We urge them to pursue their Right of Reply advocacy independent of the FOI bill’s passage. Constitutional and public policy issues remain unresolved around the Right of Reply, which should be fully deliberated in the separate measures also filed with Rep. Evardone’s committee, with all the stakeholders consulted extensively,” the Right To Know, Right Now! Coalition said.

Open to other amendments

The coalition also said they are open to other amendments to the FOI bill.

“We will support reasonable amendments to the FOI bill, like the provision on safeguard against abuse proposed by Rep. Bernadette Herrera-Dy. We will likewise support an amendment that will address the concern of the Department of National Defense over the time gap between the repeal of the existing information classification guidelines and the promulgation of the new classification guidelines as provided under the bill,” it added.

The coalition’s statement was signed by 84 advocates – a mix of members of the academe, media, business community, and civil society groups among others. – Rappler.com