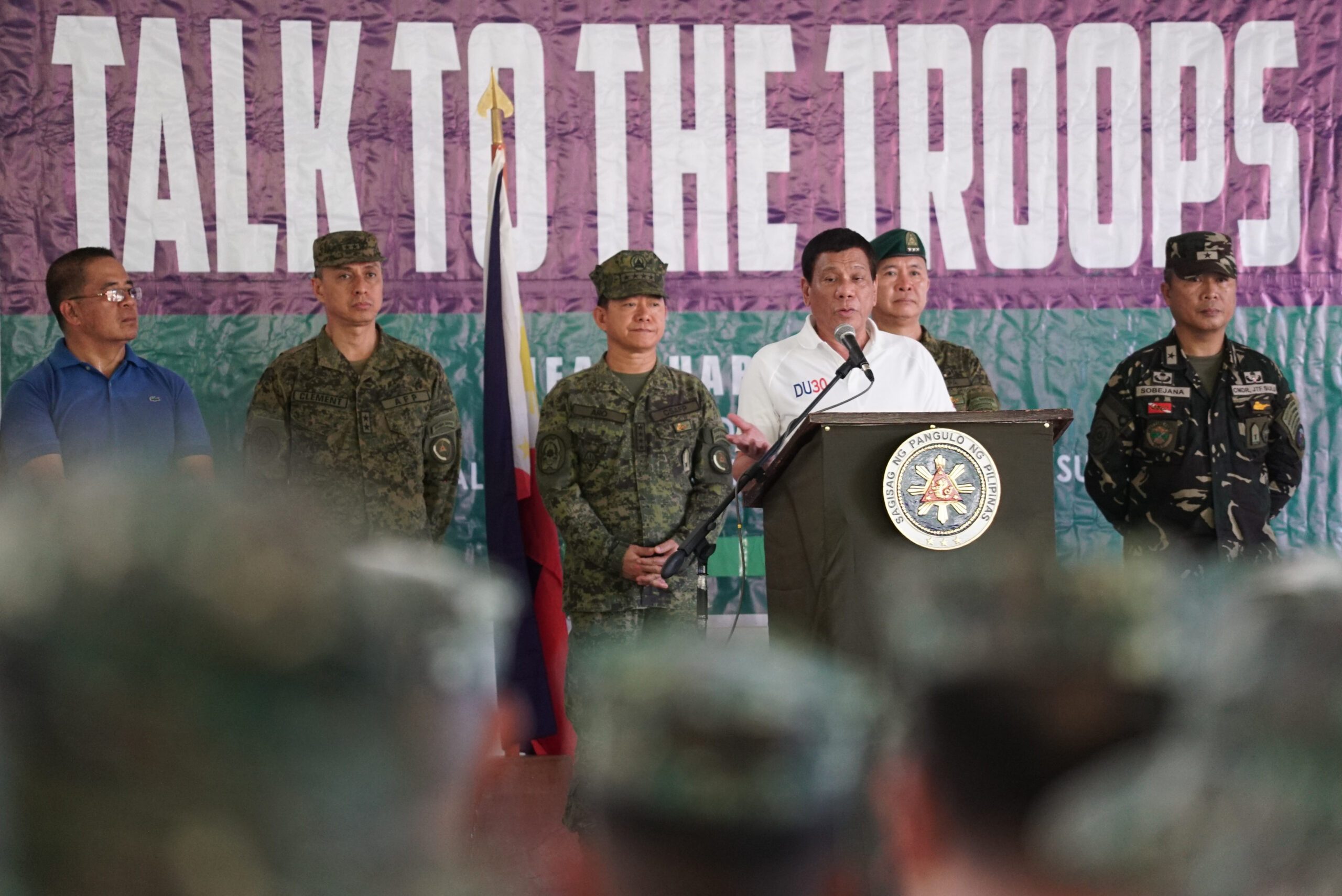 “I will accept Nur’s offer,” said Duterte on Saturday, May 27, during a speech in front of soldiers in Jolo, Sulu.

“Nur Misuari sent me a letter. He said, ‘My men, take them’…He said, ‘Take my fighters in the MNLF,” said Duterte.

He even read to soldiers the letter Misuari had sent him.

The letter, as read by Duterte, supposedly went:

Good evening. Assalamualaikum. A truly auspicious opportunity has risen for your brothers to show their mettle in helping their beloved President and the people to restore peace in Mindanao, specifically in Marawi, which is under siege by some organized criminal groups, some of them are being drug lords (sic).

For this purpose, we would like to suggest that the number of (inaudible) officers be formed or at least 500 to 700 of their men, to be drawn from the AFP Division 1 and Division 4. That they will be allowed to form their common post under [the] MNLF founding chairman, major camps in Lanao, specifically Lanao Jabal Nur in Ganassi and Maguing. That they will be allowed to invite MNLF volunteers.”

Misuari also suggested MNLF fighters who could be given officer positions in the MNLF unit, a proposal Duterte said he is amenable to.

The government and the MNLF have an existing arrangement that allows members of the Muslim separatist group to join government security forces.

The 1996 Final Peace Agreement, which Misuari signed with the Ramos government, allowed qualified MNLF members to enter the military and the police force, or surrender their arms in exchange for a sum of money.

Since this agreement, however, there have been major clashes between the MNLF and government troops. To this day, the military is targeting MNLF units in Sulu.

The MNLF was behind the 2013 Zamboanga siege that killed soldiers and police, aside from civilians. For the siege, Misuari faces charges of rebellion and sedition. He enjoys temporary freedom now because Duterte wants him to participate in the government’s peace talks with Mindanao separatist groups.

During his Saturday speech, Duterte called on all Muslim separatists to “join” him in the fight against terrorism. In return, he said he would treat them the same as soldiers, even giving them salaries and housing.

“I am announcing to all the fighters of the MI(LF), MN(LF), if this fight takes too long and you want to join the Republic, I am offering them, I will get you as soldiers, same pay, same privileges, and I will build houses for you in some areas,” he said in a mix of English and Filipino.

He offered the same to New People’s Army (NPA) rebels, on the condition that they surrender.

Clashes between the NPA and military continue after Duterte and the Communist Party of the Philippines (CPP) lifted their ceasefires.

The government recently condemned the CPP for instructing the NPA to intensify attacks against the military in response to Duterte’s declaration of martial law in Mindanao. The CPP statement caused the government to withdraw from the 5th round of talks with communists.