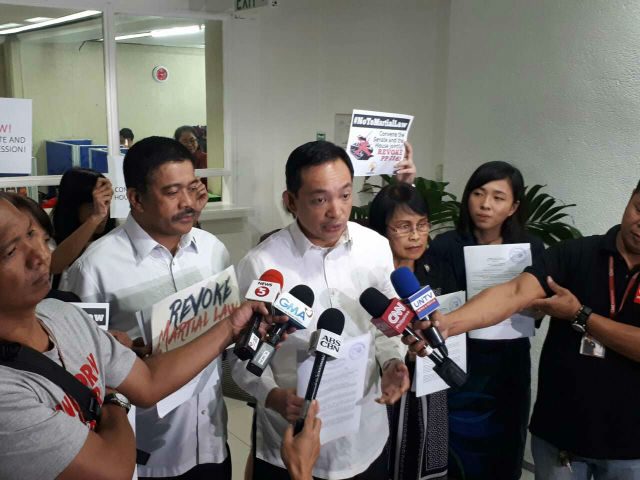 The following 7 legislators filed the resolution on Tuesday, May 30:

The day before, opposition senators filed a resolution calling for a joint congressional session to deliberate on – not revoke – the martial law declaration.

The Makabayan bloc lawmakers in the House are allied with Duterte’s Partido Demokratiko Pilipino-Lakas ng Bayan, but are already mulling bolting the alliance since they are against martial law.

De Jesus, Tinio, and Zarate were also stripped of their committee chairmanships last March after they voted against the controversial death penalty bill.

“Now therefore, be it resolved, as it is resolved, that the House of Representatives and the Philippine Senate follow the Constitution and abide by their constitutional duty to immediately convene in joint session, and revoke Proclamation Number 216, series of 2017,” read the Makabayan bloc’s resolution.

According to Makabayan, Duterte’s report to Congress on the martial law in Mindanao reveals “inaccuracy, exaggeration or falsity of the alleged events.”

The lawmakers said these inaccurate information include the alleged attack by the Maute Group on the Amai Pakpak Medical Center, ambush and burning of the Marawi Police Station, killing of 5 faculty members of Dansalan College Foundation, and the attacks on various government facilities in Marawi.

“The declaration of martial law throughout Mindanao is entirely bereft of factual basis. It is unwarranted, unjustifiable, and wholly out of proportion to the threat posed by the Maute and Abu Sayyaf groups,” said the Makabayan bloc.

The lawmakers argued no similar incident as the one in Marawi simultaneously occurred in the rest of the 27 cities and 422 municipalities of Mindanao.

“If left unchallenged, the imposition of a state of martial law in Mindanao could just be a prelude to similar declarations of military rule in other parts of, or the entire country, in the immediate future. Congress should be reminded of the grave human rights violations during Marcos’ martial law,” said the Makabayan bloc.

The 1987 Constitution allows the President to declare martial law for 60 days, but any extension requires the approval of Congress. The Supreme Court may also review a martial law declaration following an “appropriate proceeding filed by any citizen.”

Majority Leader Rodolfo Fariñas also reasoned Congress does not need to concur with the declaration and only needs to convene if it will revoke or extend martial law. (READ: No joint session on martial law? Congress ‘shields’ Duterte)

Alvarez, however, said only a majority of lawmakers can decide whether or not to convene in a joint session.

(Yes, they can file a resolution, but it does not mean that when one or two members will file, you already have to convene. You need the majority. The majority will decide if there is a need to convene.)

The House already set an all-members meeting with Cabinet officials and Autonomous Region in Muslim Mindanao Governor Mujiv Hataman at 9 am on Wednesday, May 31, to get a briefing on the situation in Mindanao.