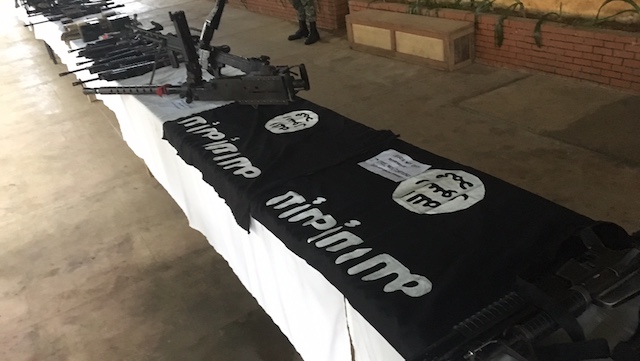 “Dalawa. Kahapon at ngayon (Two. Yesterday and today),” Major Rowan Rimas told reporters on Tuesday inside the Mindanao State University, where marines have camped to hold the university.

“This flag is nothing. For us this flag is just a piece of cloth,” Rimas said.

Rimas said they continue to bring down black flags that sympathizers hoisted on windows of residences.

The military displayed the black flags and the 18 high-powered firerms – among them a .50 caliber heavy machine guns – and other personal effects of the homegrown Maute Group that they had collected Tuesday afternoon.

Rimas said a firefight that erupted Tuesday killed 8 Maute members and resulted in the withdrawal of the enemies. “They saw our overwhelming force. They are suffering heavy losses right now,” he said.

Uniforms of the police and the military, some of them brand new, were also recovered. “Iba ibang (various) camouflage uniforms,” said Rimas. He said the enemies must have used them to get through checkpoints.

Two battalions of the Marines, from Tawi-Tawi and Central Mindanao, were brought into Marawi to conduct “combat clearing” operations.