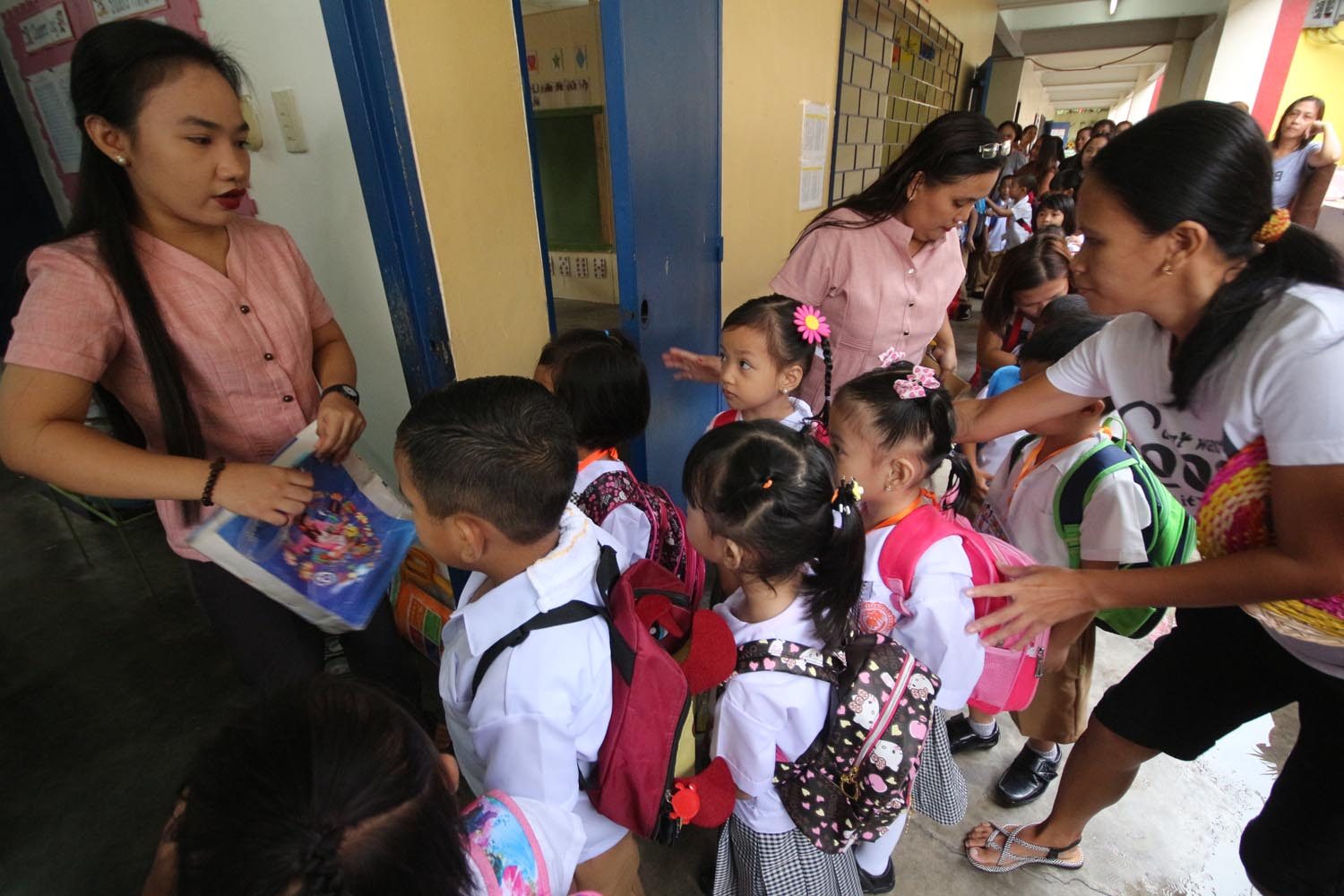 Facebook Twitter Copy URL
Copied
Including enrollees in private schools, about 27 million students are expected for school year 2017-2018, according to the DepEd

MANILA, Philippines – Most public elementary and high schools all over the country on Monday, June 5, open their doors to 22.9 million students for school year 2017-2018.

Only public elementary and high schools in Marawi City and 8 other districts in Lanao del Sur are postponing their school opening for at most two weeks, following the clashes that erupted between government troops and local terrorists in Marawi City. (READ: Martial law in Mindanao: School opening to bring ‘sense of normalcy’)

“In terms of [the K to 12] curriculum, of course, the curriculum has already been completed because this was 5 years in the making, we are now opening Grade 12,” Briones said in a recent Rappler Talk interview.

She said in a mix of English and Filipino: “The challenge is in the facilities. While we can say that we are as ready as ready can be, in terms of our standard of one class is for 40 kids, we still have instances where you have two sessions in one day because the shortage of classrooms is beyond our control.”

In a recent press conference, Briones said there was a shortage of 66,000 classrooms in 2016. This year, part of the DepEd’s P567.6-billion budget is meant for the construction of another 37,492 classrooms.

Education Undersecretary Jesus Mateo said another 10,000 will be built to replace old school buildings. He said that, based on DepEd reports, 50,000 out of over 113,000 needed classrooms have been completed thus far.

“But completion doesn’t necessarily mean it can be used, because you still turn it over. Completed means physically there,” he told Rappler in an interview.

Mateo also defended government’s bigger requirement in classrooms, saying this is “because of the drive to meet lower class size, which leads to conducive learning.”

But Briones pointed out that the country’s shortage in classrooms has not reached “crisis proportions.”

“Hindi naman crisis proportions kagaya ng panahon ko…. Noong panahon ko, children were having classes under the mango tree. How many classes going on simultaneously in one small room, may Grade 1, Grade 2, Grade 3, Grade 4. ‘Di na ‘yun nangyayari, kasi mayroon kaming specific standards on how big the classrooms will be,” the education secretary said in a June 1 press conference.

(It’s not crisis proportions unlike my time. During my time, children were having classes under the mango tree. How many classes going on simultaneously in one small room, there were Grade 1, Grade 2, Grade 3, Grade 4 classes. That no longer happens, because we have specific standards on how big the classrooms will be.)

While she’s not denying that “there will still be shortages” and even admits that her department “cannot say with 100% certainty that everything is there,” Briones insisted that government is “generally ready” for the June 5 school opening.

Highlights of the DepEd’s 2017 budget include:

Briones said any complaint regarding the opening of classes should be addressed to the teachers and principals present in schools.

“Hanapin kaagad ‘yung principal. Tapos kung ‘di pa nare-resolve, nandiyan ‘yung district superintendent, and then you can go up to the regional director, and finally, to us here [at the Central Office]. But we will also be monitoring,” she added.

(Look immediately for the principal. If it’s still not resolved, there’s the district superintendent, and then you can go up to the regional director, and finally, to us here at the Central Office. But we will also be monitoring.)

As millions of students flock to schools for their first day of classes, state weather bureau PAGASA said it will be a cloudy Monday for Mindanao, and the skies will bring light to moderate rains and thunderstorms due to an intertropical convergence zone.

Metro Manila and the rest of the country will experience partly cloudy skies in the morning, and cloudy skies from afternoon to evening, with chances of rainshowers and thunderstorms.

Meanwhile, the Metropolitan Manila Development Authority said it will deploy 2,296 traffic constables along critical areas leading to schools that are prone to traffic congestion.

The DepEd estimated that about 27 million students will enroll in public and private schools nationwide for school year 2017-2018. – Rappler.com