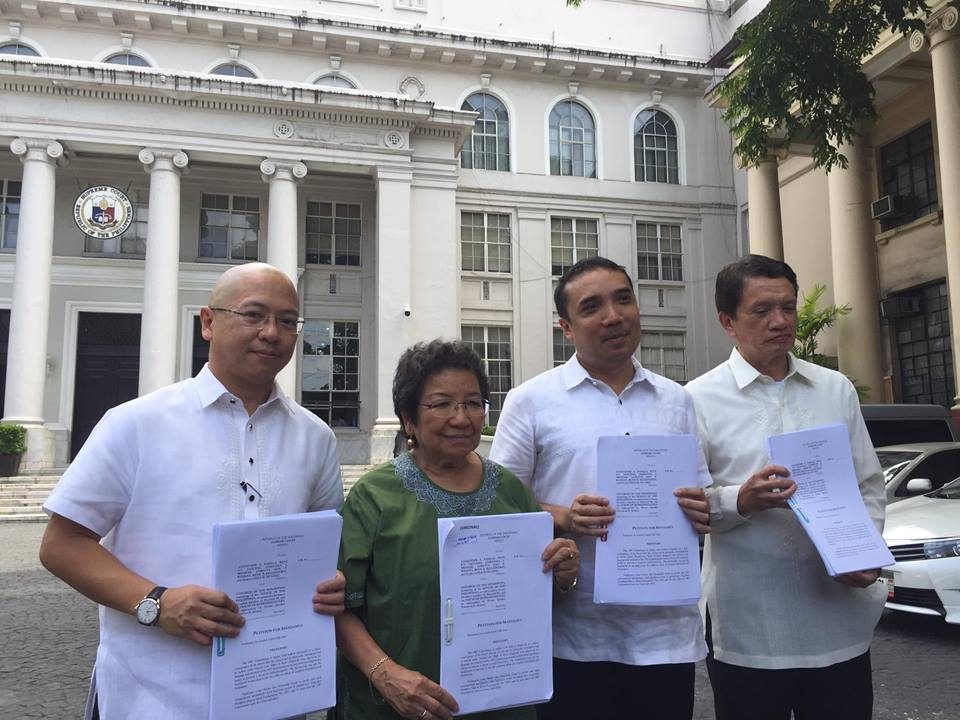 The prefatory statement in the SC petition says, “The 1987 Constitution is replete with built-in safeguards as a direct consequence of the abuses that the country and its democratic institutions had to endure under the martial law.”

It adds: “Petitioners come before this Honorable Court to invoke one such constitutional mechanism – joint legislative review of martial law long after President Marcos lifted Proclamation No. 1081 and 30 years after the 1987 Constitution.”

Hilbay is the group’s counsel, along with FLAG’s Jose Manuel “Chel” Diokno, who is also the dean of the De La Salle University College of Law, and Barry Gutierrez, the legal adviser of Vice President Leni Robredo.

Hilbay earlier said that the “Constitution is clear” in terms of martial law: “Congress has the ministerial duty to convene a joint session and deliberate the factual and constitutional bases for martial law. Government should not be allowed to violate the Constitution.”

According to the petitioners, there are two important things that will be accomplished if Congress convenes on martial law, even if it’s to affirm the presidential proclamation: transparency and accountability.

“The point of the joint session is for the public to listen to the arguments, so things are done in a transparent way so that the public will know: niloloko ba tayo (Are we being fooled)?” Rosales said.

“The Congress has the power to revoke or affirm, but they cannot exercise that power just through silence or resolutions,” Hilbay said.

The House and the Senate had issued separate resolutions supporting the declaration of martial law.

According to Hilbay, martial law is the only instance where the Constitution requires the two chambers to sit as one deliberative body. The former solicitor general said that even if President Rodrigo Duterte lifts martial law, the SC should still act on the petition and seize the chance to clarify the guidelines.

“If he lifts it, we should still proceed because this may happen again,” Hilbay said.

In 2009, Congress convened when then President Gloria Macapagal-Arroyo declared martial law in Maguindanao in light of the massacre that killed 58 individuals, mostly journalists.

Hilbay said that precedent should be enough reason for Congress to convene. But while they have not, Padilla stressed the importance of the SC to step in now since this would be the first time for the High Court to decide on something like this under the 1987 Constitution.

“It’s going to be tested now….Mukhang ang Kongreso ay iwas pusoy (It looks like Congress is being evasive), they want to evade responsibility. They want the best of worlds, give in to the President pero hindi sila sasagot sa kahit kanino (but they won’t be held accountable). they should take this responsibility,” Padilla said.

The petition for mandamus also has the support of 331 lawyers who signed the annex included in the petition. Among them are maritime law expert Jay Batongbacal, former Quezon City representative Lorenzo Tañada III, Wigberto Tañada Jr, and former deputy presidential spokesperson Abigail Valte.

Hilbay called out on Twitter lawyers “of good standing” to support the petition. He said it took them only 4 days to gather the signatures.

“It was initially a half-meant joke but it gained traction and in such a short time we were able to get that much support,” Hilbay said.

According to Hilbay’s earlier callout on Twitter, Congress issued the resolutions “without holding a joint session as required by our Constitution. This is a shortcut to an important process.”

“What we’re happy about is that the members of the Philippine Bar are standing up, making their voices heard and expressing their desire to uphold the Constitution,” Gutierrez said.

“I call these 331 lawyers the 331 guards of civil liberty,” Rosales said in Filipino. – Rappler.com