Resorts World sprinklers worked but were not enough, says BFP

Jun 6, 2017 3:33 PM PHT
Rambo Talabong
Facebook Twitter Copy URL
Copied
Fire officials say they could not enter immediately because it was not just a fire they were up against, but also a gunman 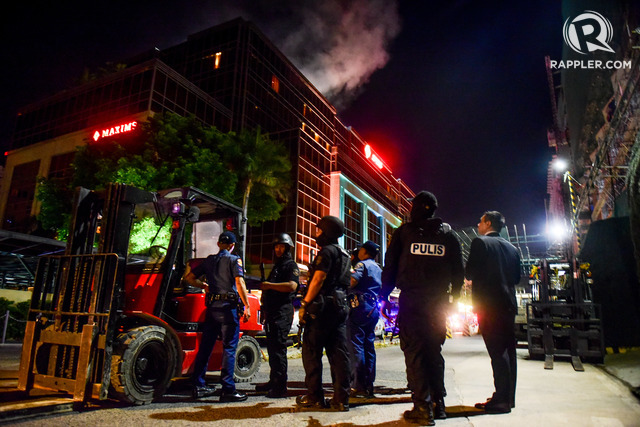 MANILA, Philippines – Bureau of Fire Protection (BFP) National Capital Region chief Rico Tiu confirmed on Tuesday, June 6, that the sprinkler system of Resorts World Manila worked during the night of shooting and burning in its premises. But these were not enough to save the victims.

Tiu said they worked on “lessening” the fire and smoke, but they could not substitute for actual firemen. (READ: TIMELINE: Resorts World Manila attack)

BFP public information chief Ian Manalo supported Tiu’s claim, saying that sprinkler systems are “not designed to put out fire, but to prevent it from spreading.”

(We would arrive there to put out the fire. The sprinklers do not have much water pressure, it’s just like watering the flammable materials to lessen their flammability.)

Manalo and Tiu told Rappler they are now interested in the smoke evacuation system, as it should have sucked out the smoke that killed most of the 37 victims.

They still do not know if the smoke evacuation system worked, but ideally, both systems should have helped people evacuate, and firemen put out the fire completely when they arrived.

Citing the spot report of their response team, the officials said they received the call at 12:31 am and quickly arrived at approximately 12:40 am.

The problem, according to Manalo and Tiu, was that they could not enter immediately because it was not just a fire they were up against, but also a gunman. (READ: Ex-DOF employee is Resorts World gunman – police)

“Hinintay namin matapos yung barilan at saka nagbigay ng go signal ang police, ang security, hindi basta-basta,” Manalo said. (We waited for the exchange of shots to stop, for the police’s signal that we could enter. It wasn’t all in one go.)

Nonetheless, Tiu said their firemen entered even before the coast was clear.

“Nag-attempt na sila with SWAT behind them para masugpo na [ang] puwedeng masugpong apoy at tumulong sa evacuation. When all of a sudden nagkaputok, withdraw,” Tiu said. (They attempted to enter with the police SWAT team behind them, to contain the fire and to help evacuate people. When all of a sudden, there was shooting, they withdrew.)

JC Alarcon, a fire volunteer who helped plug in the water supply for the firefighters told Rappler that the firemen entered the building at approximately 2:30 am, two hours after the fire broke out.

Manalo added that the gunman may have also prevented the people from escaping from the thick smoke as they may have been “conditioned” by the Marawi clashes and Islamic State (ISIS) attacks all over the world. (READ: Duterte: Why were Resorts World victims trapped?)

Another issue that the BFP investigation is currently facing is that their regulatory mandate clashes with that of the Philippine Economic Zone Authority (PEZA).

Manalo said they are yet to find out which of them issued a fire safety permit to the casino, and if the entire building was inspected by PEZA or the BFP.

Manalo said he is sure that Resorts World Manila is under PEZA’s regulation, but the individual businesses leasing property within the complex are required to acquire Fire Safety Inspection Certificates (FSICs) from the BFP.

This issue was recently raised by Justice Secretary Vitaliano Aguirre II, who said that the measure may have prevented the BFP from fully regulating the fire security measures of the posh complex. (READ: DOJ: De Lima could be liable for PEZA regulation of casino fire safety)

Aguirre blamed the 2014 legal opinion offered by former justice secretary and now Senator Leila de Lima which said PEZA would have jurisdiction over the casino.

Aguirre said he is inclined to reverse De Lima’s legal opinion, in light of the attack. – Rappler.com