UP inches up in latest QS world university rankings 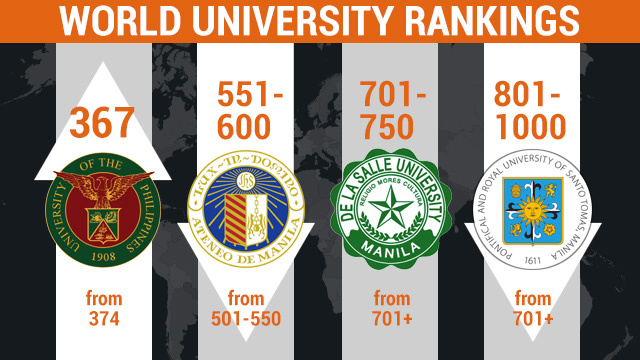 While UP saw an improvement in its ranking in 2017, the De La Salle University maintained its rank (701-750), and the 2 other Philippine universities in the annual list ranked lower: 551-600 for Ateneo de Manila University and 801-1000 for University of Santo Tomas.

The Massachusetts Institute of Technology in the United States is still the world’s top university, while the Nanyang Technological University in Singapore is the best in Asia and the 11th best overall.

The 14th edition of the QS World University Rankings ranked over 950 universities from 84 different countries.

It adopts a methodology that consists of 6 indicators:

Editor’s note: An earlier version of the story only referred to “UP Diliman,” which is what is in the QS institution profile page. The story has been edited to refer to the UP System, based on statistics provided in the same profile page.