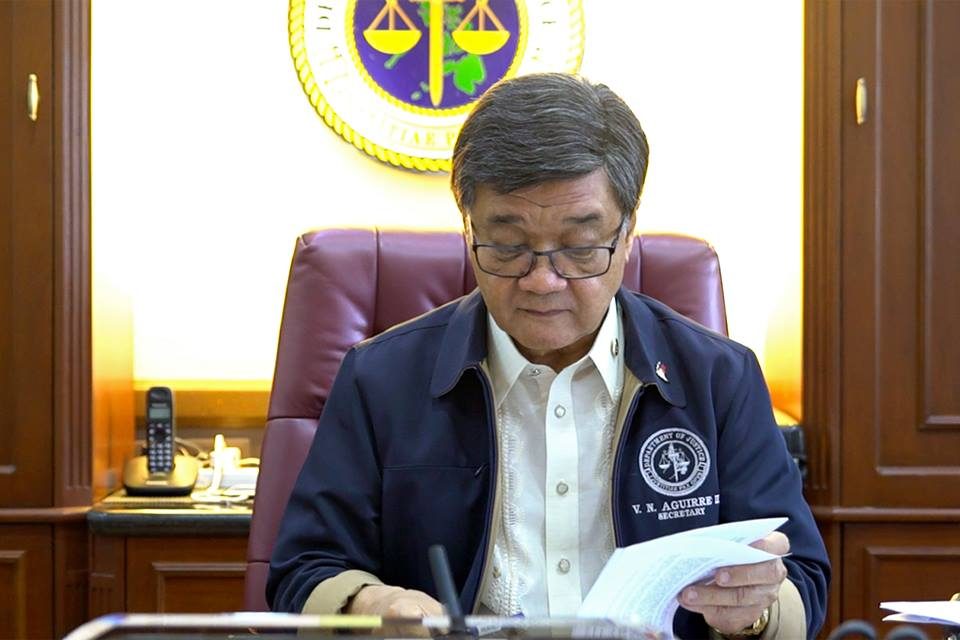 Facebook Twitter Copy URL
Copied
(UPDATED) Even after the discovery of false claims and an old unrelated photo, Aguirre stands by his Department Order 385 to probe into a supposed destabilization plot by opposition leaders

MANILA, Philippines(UPDATED)  – Justice Secretary Vitaliano Aguirre II on Saturday, June 10, said he will not revoke the order he issued directing the National Bureau of Investigation (NBI) to conduct a case buildup against opposition leaders.

“I did not and will not revoke it,” was Aguirre’s short response to Rappler through a text message when asked about the Liberal Party or LP’s statement on Saturday asking him to recall the order.

“We demand that Department Order 385 be revoked and for Aguirre to stop the political harassment of members of Congress and the opposition, even as we continue to study our legal options against him,” the LP said in a statement on Saturday.

Deparment Order 385 tasks the NBI to “conduct investigation and case build-up over the alleged destabilization plot against the government of the Philippines by some Senators and other Opposition Leaders.”

Order 385 does not provide basis but directs the NBI to file cases “if evidence warrants.”

The order was signed on Wednesday, June 7, the same day of the press conference where he insinuated that some opposition lawmakers may have triggered the crisis in Marawi.

According to his media officers at the DOJ, Aguirre issued the order right after the press conference.

Aguirre already cleared Senator Paolo Benigno “Bam” Aquino and the two had supposedly talked over the phone on Thursday wherein Aguirre apologized to the senator.

“Upon further verification, I was able to establish that Senator Bam Aquino went to Marawi City on May 19, 2017 upon the invitation of Governor Soraya Alonto-Adiong to promote the Go Negosyo program. He was not present in the alleged meeting of opposition leaders and said to have been held in Marawi City on May 2, 2017,” Aguirre said on Friday, still sticking to an earlier claim that a meeting did happen on May 2. (READ: NUJP to Aguirre: Media won’t be scapegoat for your ‘lies’)

During Wednesday’s press conference, Aguirre said the lawmakers who were present in the May 2 meeting were Senator Antonio Trillanes IV, Magdalo Representative Gary Alejano, and former presidential political adviser Ronald Llamas, all of whom have said they were some place else on May 2. They each provided proof.

Aguirre has denied using a 2015 photo of the 3 taken in Iloilo to link them to the supposed meeting, even though there is footage of him showing the photo to media during Wednesday’s press conference.

“Department Order 385, released after the same press conference where he first made the accusation, is absurd and preposterous. Given said events, we question the credibility of the basis of this investigation,” the LP said.

“This forms a pattern of squid tactics as Aguirre himself has been embroiled in corruption issues, such as the P50-million extortion scandal in the Bureau of Immigration (BI), and his and his brother’s alleged involvement in small-town lottery (STL) in Luzon,” the LP said.

The Senate Blue Ribbon Committee has already cleared Aguirre in the scandal.

The STL issue, on the other hand, stems from the allegations of Charlie “Atong” Ang who accused the justice secretary’s brother of controlling the government’s small town lottery (STL) operations in Batangas, Laguna, and Bicol, which Aguirre categorically denied.

“Aguirre also floated the lie that LP members were behind a P100-million bribe try on his drug lord witnesses against Senator De Lima to recant their testimonies against the now-detained senator. He later revealed the two to be former senator Jamby Madrigal and PDP-Laban Congresswoman Len Alonte, who both vehemently denied the accusation,” the LP said.

LP added: “The justice secretary also embarrassed the country when he linked people from the South Korean embassy to the kidnapping and killing of Korean businessman Jee Ick Joo which happened right inside Camp Crame.”

“As justice secretary, Aguirre holds the grave task of upholding the rule of law and administering justice after due process. From the looks of it, however, the justice secretary seems hell-bent on pinning down the political opposition and those critical of him and his administration,” LP said.

In a statement on Saturday, Senator Risa Hontiveros tagged Aguirre as a “fake news king” who would rather busy himself with false claims against administration critics such as the alleged destabilization plot against Duterte.

(Doesn’t the fake news king of Padre Faura have anything else to do? Innocent civilians and soldiers are dying in Marawi but Aguirre is only focused on fake cases and fake news.)

She said she would “not be surprised if a case is filed against me or my colleagues in the Senate minority.”

Even so, Hontiveros said: “I will not be intimidated or silenced. I will continue to take the floor and speak truth to power. They can make thousands of fake news accounts, they can threaten me with false charges but I will continue to stand. They cannot stop me from doing my duty as a legislator to speak out about our civil liberties and oppose creeping authoritarianism.”

Aguirre has not replied to Rappler’s request for additional comment as of posting time. – Rappler.com