Facebook Twitter Copy URL
Copied
(UPDATED) From touching scenes in crisis-hit Marawi City to protests in Metro Manila, here is a look at how Filipinos celebrated the 119th anniversary of the declaration of the country's independence

MANILA, Philippines (UPDATED) – For the first time since the Marcos dictatorship, the Philippines is celebrating Independence Day with a portion of the country – Mindanao – under martial law.

President Rodrigo Duterte had declared martial law in Mindanao on May 23, after clashes erupted between government forces and terrorists in Marawi City, Lanao del Sur. On Monday, June 12, as the country celebrated its 119th Independence Day, the most emotional scenes were understandably in the crisis-hit city.

In flag-raising ceremonies in Marawi City, soldiers and civilians wept as the flag was being raised. It was the first time they had raised the flag since the clashes began.

Gunfire and the sound of explosions from air strikes can still be heard in the city, with the siege on its 21st day. 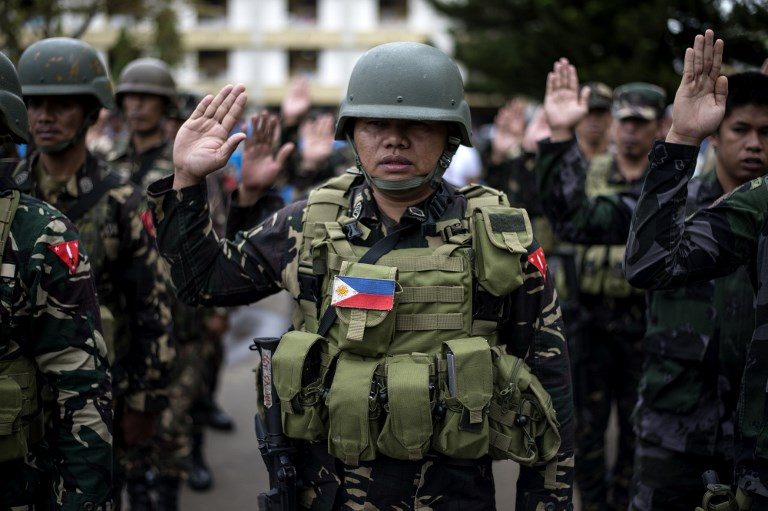 In Manila, Duterte skipped the flag-raising ceremony at the Rizal Park. Foreign Secretary Alan Peter Cayetano, who represented the President, said Duterte was not feeling well. The President, in his Independence Day message, earlier urged Filipinos to preserve Philippine sovereignty. For some groups, Independence Day is a time for activism. Leftist group Bayan trooped to the United States embassy in Manila, where they denounced what they described as US “intervention” in the Philippines’ affairs. There were some scuffles with riot police. “Today, we remember that our national independence was brought about not by giving into fear but by holding onto the hope for a better tomorrow. That was how our heroes fought then. That is how we fight now,” said Akbayan Representative Tom Villarin, as his group held an Independence Day protest in Plaza Miranda, Manila. Hundreds of students and members of various organizations showed up at an interfaith prayer rally at Andres Bonifacio Shrine in Manila. They appealed to the government to lift martial law in Mindanao, pursue peace talks, and reinforce human rights amid extrajudicial killings in the country. Among them was Medy Gonzales, 68, who wore a t-shirt bearing the words “I survived Martial Law, and once is enough.” Medy organized farmers and workers in Manila during the Marcos regime, and was arrested for it.

She came with her 73-year old husband and long-time activist Pedro “Tata Pido” Gonzales, who was using a walking assistive device. He has been using it since 2004, after suspected military men shot him multiple times when he ran for a seat in the Quezon provincial board under the Anakpawis party. 17-year old Judy Anne Santor came onstage with other families of victims of the drug war. Judy Anne’s mother, brother, and pregnant sister-in-law were killed along with 4 neighbors by riding-in-tandem suspects on December 28, 2016, in their home in Caloocan City.

“We are here trying to be strong even when we almost can’t anymore because we have to fight for justice,” Judy Anne said.

After the program in Andres Bonifacio Shrine, the rally continued in Mendiola Peace Arch where attendants participated in a “die-in” protest before a streamer that wrote, “stop the killings.” In Zambales, artists’ group Dakila raised the flag in the West Philippine Sea (South China Sea), a “symbolic gesture” that had once been promised by the President himself. Protesters in Makati City also called for an end to China’s aggressiveness in the disputed waters, demanding that it respect Philippine sovereignty. – with a reports from Eloisa Lopez/Rappler.com