Dec 5, 2012 1:43 AM PHT
Facebook Twitter Copy URL
Copied
The typhoon left a trail of destruction, including 44 dead in Compostela Valley and 23 and Davao Oriental MANILA, Philippines – Typhoon “Pablo” slammed into eastern Mindanao and the Visayas on Tuesday, December 4, killing at least 73 people and forcing more than 56,000 to flee their homes in fear of the worst storm to hit the Philippines in 2012.

“Pablo” (international codename: Bopha) made landfall at 4.45 am over Baganga, Davao Oriental, packing maximum sustained winds of 175 km/h and gusts of up to 210 km/h with intense rainfall that showered dozens of cities and municipalities and generated giant waves that threatened coastal areas like Cagayan de Oro.

The initial impact of the typhoon generated a mudslide that swept away an army truck with dozens of soldiers and civilians and left 44 dead and 25 injured in the small town of New Bataan in Compostela Valley.

A total of 73 people have been reported dead, 23 of them in Davao Oriental.

However, the National Disaster Risk Reduction and Management Council (NDRRMC) keeps its own count at 4 fatalities and two missing as of 6 pm. 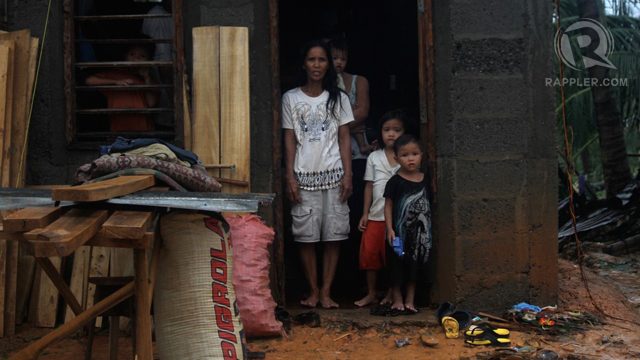 Although the typhoon made landfall in Davao Oriental, the neighboring province of Compostela Valley was by far the most severely affected by the storm.

Minutes after “Pablo” crashed into eastern Mindanao, the torrential rain and strong winds provoked a mudslide that swept away an army truck carrying dozens of soldiers and civilians, leaving 44 dead and 24 injured.

The deaths were not reported until late in the evening, as the rescue teams struggled to reach the town of New Bataan through impassable roads due to landslides caused by the heavy rain.

Also in Compostela Valley, three people — including a young mother and her baby — perished when their house was buried by the mood in Compostela town.

The provincial capitol building in Nabunturan, built only a few years ago, is now almost destroyed after “Pablo” broke its roof and glass windows, and flooded the structure until the 3rd floor.

Davao Oriental also reported a tragedy: 23 residents died in Catleen town, according to Gov Corazon Malanyaon, who called for help from the Navy to reach 3 coastal villages isolated by land.

Malanyaon said most of the evacuation centers in the province are collapsed. As of 6 pm, the NDRRMC reported that over 56,000 people were housed in evacuation centers, while the total affected population — including evacuees — in Mindanao and the Visayas tops 60,000.

Most of the evacuees come from Surigao del Sur, where “Pablo” was forecast to make landfall this morning before it veered slightly and slammed into Davao Oriental. (Read: IN PHOTOS: ‘Most terrifying typhoon I’ve seen’)

The typhoon then weakened a bit but was still registering maximum sustained winds of 160 km/h and gusts of up to 195 km/h when it threatened the islands of Negros and Siquijor late in the afternoon.

“Pablo” is now advancing over the Sulu Sea toward northern Palawan, where it will arrive in the next 12 hours, according to weather bureau PAGASA’s track.

A total of 145 flights to and from Mindanao and the central islands had been cancelled since Monday night and more than 3,000 ferry passengers were stranded as vessels were ordered to stay in port.

Large parts of Mindanao were also without electricity after owe was cut to reduce the risk of fires and electrocutions. – Rappler.com