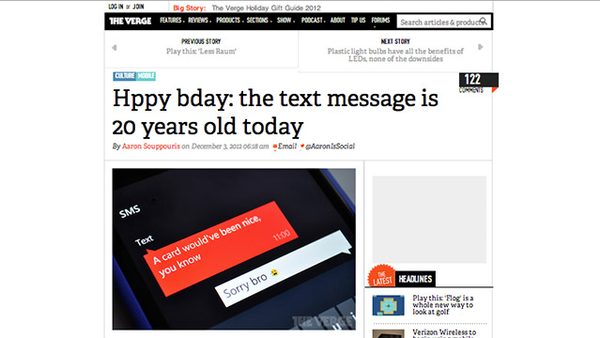 Texting celebrated its 20th birthday on Monday. On Dec 3, 1991 British engineer Neil Papworth sent the first text, “Merry Christmas” to the mobile phone of Vodafone executive Richard Jarvis. At that time it was only intended as a easy way for staff within a company to send messages to each other. Papworth said, “it didn’t seem like a big deal.” One year later, Nokia introduced GSM handsets that supported the Short Message Service (SMS). The rest as we know is history. While more and more smartphone users also use competing services like BlackBerry Messenger, Apple’s iMessage, and cross platform mobile platforms like WhatsApp, SMS usage continues to increase worldwide.


Read more on the Verge and on Huffington Post.