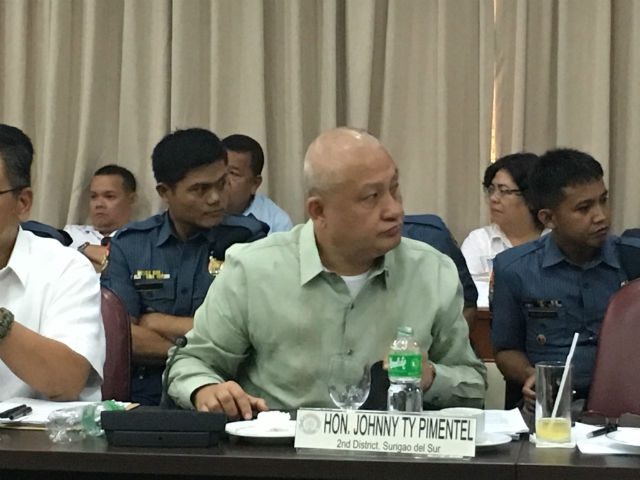 Among the victims who lost valuables during the attack was Elizabeth Panlilio-Gonzales, the late wife of Pampanga 3rd District Representative Aurelio Gonzales Jr.

Gonzales met with Pimentel and Majority Leader Rodolfo Fariñas on Tuesday evening, June 20, and told them his wife’s valuables were lost when the family got her body from the funeral home.

“According to Representative Gonzales, his wife had a watch, which is a Rolex and some jewelry, which are missing already. Aside from the watch and some jewelry, the credit cards and the ATM (automated teller machine) [cards] are also missing,” said Pimentel.

He also found it “more bizarre” when Gonzales said his wife’s bank records showed P25,000 was withdrawn from her account 3 days after she died.

“How can that be possible? Meaning somebody used the ATM [card],” said Pimentel.

Gonzales himself corrected the figure the next day, saying the amount withdrawn was only P20,500. He said he did not attend any of the Resorts World hearings in the House because “grief, sadness, and anger continue to torment [him].”

After engaging in a quick shootout with hotel security, police said Carlos entered a hotel room and committed suicide there by setting himself on fire and shooting himself. (READ: More security lapses uncovered as House probes Resorts World attack)

On Wednesday, Pimentel also recounted the previous testimony of a Bureau of Fire Protection (BFP) employee on an alleged stolen watch from one of the unconscious victims inside Resorts World last June 2.

“One of the BFP personnel testified that on their way up, they encountered an unconscious person. And at that time, mayroon pang relo (the person still had a watch). But when they came back, wala nang relo (the watch was gone),” said Pimentel.

No inventory of hotel property yet

Pimentel, who chairs the House committee on good government and public accountability, then asked Resorts World Manila president Kingson Sian if the management had already checked if the hotel-casino lost other valuables after the attack.

Sian said they have not conducted an inventory yet because the crime scene remains closed.

Pimentel then said: “Maraming looting na nangyari (A lot of looting happened)… I think this matter should be properly investigated.”

The Resorts World Manila management has already promised to give financial aid to both the fatalities’ families and those injured, including funding the education of the victims’ children until college.

Sian said as of June 20, only 6 out of the 37 families of the victims have yet to receive the promised P1-million compensation from the hotel-casino.