Duterte limits use of firecrackers to ‘community displays’ 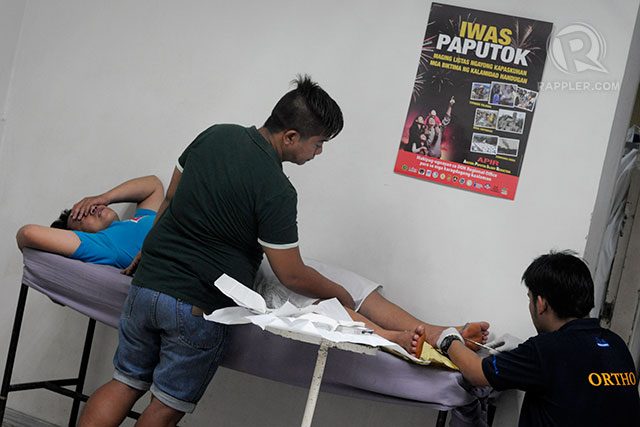 EO No. 28, signed on Tuesday, June 20, thus bans private citizens from using firecrackers or staging their own fireworks displays at their residences, a common activity during New Year’s Eve or Chinese New Year.

“To minimize the risk of injuries and casualties, the use of firecrackers shall henceforth be confined to community fireworks displays,” reads Section 1 of the EO.

The EO defines “community fireworks displays” as a display “conducted on the occasion or as part of a celebration, competition or similar event held in a venue other than a place of residence.”

It must also be conducted under the supervision of a “trained person duly licensed by the PNP” (Philippine National Police) and must have been allowed by the municipality or city concerned through a permit specifying the date, time, and location of the fireworks display.

The EO also orders the PNP to come up with criteria on types of firecrackers and pyrotechnic devices to be prohibited even in community fireworks displays.

The criteria must be promulgated within 30 days from the effectivity of the EO. The PNP should also make public the list of banned firecrackers and pyrotechnic devices.

However, the EO said certain pyrotechnic devices other than firecrackers may be used outside community fireworks displays depending on existing rules and regulations.

The PNP has been put in charge of implementing EO No. 28. But it should coordinate with the Department of the Interior and Local Government, Bureau of Fire Protection, Department of Health, and Department of Environment and Natural Resources in crafting implementing rules and regulations for the EO.

This is the second EO that matches rules Duterte implemented in Davao City while he was mayor.

Last May, Duterte signed an EO designating smoking areas and banning them from schools and recreational facilities for minors. As Davao City mayor, he had prohibited smoking in public places and implemented a liquor ban.

Health and environment groups have long called on government to regulate the use of firecrackers, especially during New Year celebrations, given the spate of injuries and spike in air pollution it causes. – Rappler.com