Marawi tanks with graffiti are talk of the town 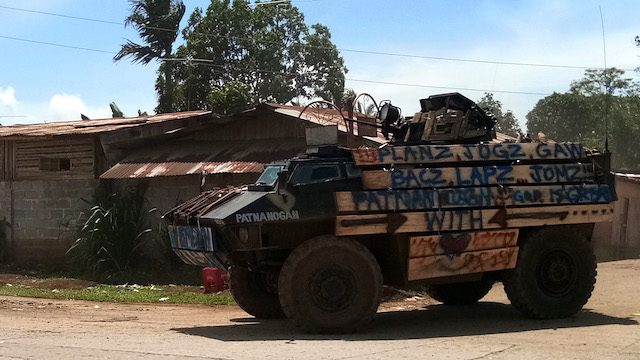 MANILA, Philippines – They’ve been a comic relief in a city torn by war. They’ve also, soldiers say, been effective in keeping troops safe.

At the height of the fierce gun battles with terrorists in Marawi City, the Philippine military started wrapping its armored personnel carriers (APCs) with wooden planks, apparently as additional protection from the anti-tank weapons that homegrown terrorists have plenty of.

Photos of these APCs with graffiti have become viral online, drawing praise for the Philippine military’s ingenuity and the soldiers’ sense of humor. Popular Mechanics, a magazine on popular science and technology, has also taken notice. The soldiers, who have been fighting the ISIS-linked terrorists for a month now, had fun doodling on the wooden planks. One viral photo shows a “Mad Max” sign in front of the tank, inspired by a Hollywood movie. Another graffiti screamed, “Free Wifi.” Other soldiers doodled their own names.

Lieutenant Colonel Jo-ar Herrera, spokesman of the Joint Task Force Marawi, said they have proven effective in the battlefield.

APCs are meant to safely carry troops to the battlezone, but the rocket-propelled grenades RPGs of the terrorists have been able to pierce through the metal. This has delayed troop movement to the frontlines. (READ: Marawi battle zone: Urban warfare challenges PH military) It’s not foolproof but the wooden planks have been able to trigger the explosion of some RPGs, keeping troops inside the tanks safe, according to Herrera.

Local Facebook groups watching developments in the Philippine military have also been talking about the “do-it-yourself” armor for the tanks. Discussions show that other militaries have resorted to different technics.

A January 2016 article on Popular Mechanics shows the Iraqi and Syrian militaries have also attached spare tires on to their tanks. – Rappler.com