Jun 26, 2017 3:00 PM PHT
Lian Buan
Facebook Twitter Copy URL
Copied
(UPDATED) Calling himself the 'tribune of the people,' Solicitor General Jose Calida has visited a drug lord in jail and faced the Supreme Court – all to bring down a Duterte critic 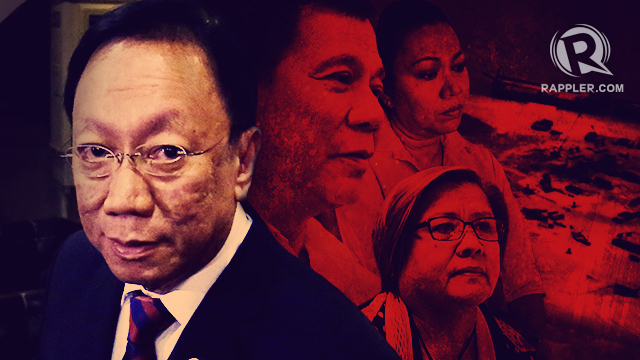 MANILA, Philippines (UPDATED) – In the ’80s, Fiscal Rody became friends with lawyer Jose Calida, better known as Attorney Joe. Fiscal Rody graduated from San Beda; Attorney Joe, from Ateneo. But both returned to their hometown of Davao City to practice law. And the legal circle there was close knit.

In 2001, then-President Gloria Macapagal Arroyo appointed Calida to the Department of Justice (DOJ) as one of its undersecretaries. In 2004, he left the DOJ and went back to private practice.

In 2009, his friend Mayor Rody needed a lawyer. Then Human Rights Commission Chairperson Leila de Lima was probing the alleged Davao Death Squad (DDS) and was digging quarries to recover bones of supposed victims. “Being a good friend, I volunteered my services,” Calida said in an interview with Net 25’s Patakaran last March.

In 2016, Candidate Rody got Attorney Joe as one of his campaign managers.

When he learned he would be President Rodrigo Duterte, he named him his Solicitor General.

Calida was quick to go to work. In the case buildup against Senator Leila de Lima for allegedly extorting money from drug convicts to fund her campaign, Calida went inside Bilibid, the Philipines’ main penitentiary, to talk to one of these convicts.

According to an affidavit by Jaybee Sebastian, Calida and De Lima’s critic Sandra Cam had gone inside the national penitentiary to ask him questions.

De Lima used Sebastian’s affidavit to accuse Calida of making a deal with a drug lord, but the Solicitor General dismissed it as just another act of desperation by the “delusional, hypocrite” De Lima who was then already locked up in Camp Crame.

Calida never addressed this issue directly – not when he was asked by Associate Justice Marvic Leonen on the floor of the Supreme Court during oral arguments, and not in his memorandum subsequently submitted to the SC. 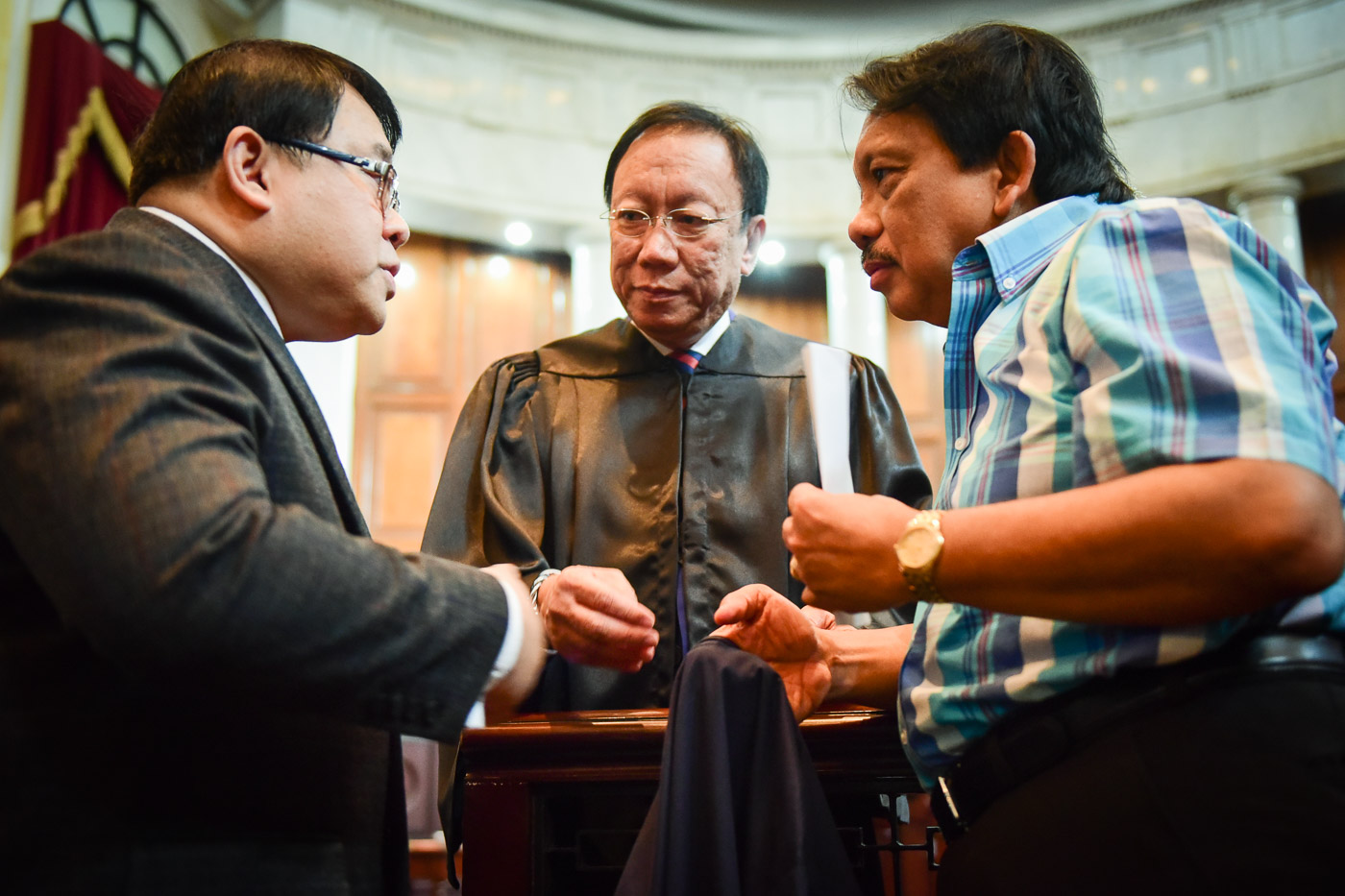 The drug cases were filed against De Lima at the DOJ by the Volunteers Against Crime and Corruption or VACC. In December 2016, when the DOJ was conducting a preliminary investigation into the complaint, Calida attended the proceedings and even entered his appearance.

Calida answered with his now-most familiar quote: “I attended in my capacity as tribune of the people.”

Calida admitted to Sereno he was there to support the VACC, being a former member of the organization. But, in fact, as early as December, Calida had announced he was willing to lend the services of the Office of the Solicitor General (OSG) to private complainants in the De Lima cases.

The Chief Justice told Calida to submit to them a report clarifying the mandate of the OSG. “Because I think I’m interested in questions that were raised by Justice Leonen in the earlier part of his interpellation on whether, in fact, this is common criminal investigation or prosecution, or it has already reached a persecution component,” Sereno said.

The SC has yet to rule on the De Lima petitions, but Calida is already counting this as victory.

During the 116th anniversary of the OSG held in Pasay last June 8, Calida, speaking before lawyers and VIPs, listed as one of his achievements his performance in defending Muntinlupa Trial Court Judge Juanita Guerrero, who ordered De Lima’s arrrest on one out of 3 counts of drug trade.

“We are confident that the SC will uphold our position. Senator De Lima’s indictment and arrest manifest the government’s political will against narco-politicians regardless of rank and stature. In the meantime, Senator De Lima is savoring the solitude of her forced vacation in Camp Crame,” Calida said.

In the thick of his work in the De Lima cases, Calida found another important job: to have alleged pork barrel scam mastermind Janet Lim Napoles acquitted.

On January 11, 2017, the OSG submitted a manifestation in lieu of a rejoinder, recommending to the Court of Appeals (CA) to acquit Napoles from her lower court conviction of serious illegal detention. Last May, the CA took the side of the OSG and acquitted Napoles.

Calida cited the acquittal as another victory.

“I recommended the acquittal of Janet Napoles from her trumped-up conviction for the crime of serious illegal detention, which the CA approved. Since then, some people have suffered sleepless nights, for reason I don’t know,” Calida said. (READ: FACT-CHECK: Did Calida flip-flop on Napoles illegal detention case?)

Calida has defended this move, saying an SC ruling allows the Solicitor General to take the side adverse to the government’s position, especially if he sees the government to be on the wrong side.

“If we see that there is injustice, we will not close our eyes to it,” Calida said in February.

This, he said, was his job as tribune of the people, defender of the Republic.

Raji Mendoza, lawyer of Benhur Luy, the complainant in the illegal detention case, questioned why, of all the cases needed to be resolved by the OSG, Calida took on the Napoles case.

OSG spokesperson Erik Dy told Rappler in February that Napoles was nothing special, and that Calida had commented “on thousands of cases” ever since he was appointed in July 2016.

According to the report of the Commission on Audit, the OSG has a backlog of 333,539 cases.

Rappler has repeatedly requested the OSG for an itemized list or summary of its cases, or to comment on the case backlogs in light of the Napoles acquittal, but the OSG has not returned to us with a response.

In his rundown of the OSG’s achievements, Calida mentioned as the top of his list the Hague’s favorable ruling to the Philippines in its arbitration case against China in the maritime dispute over the West Philippine Sea.

The ruling came on July 12, 2016, during the first two weeks of Calida in office. The win was a result of a 3-year-long arbitration process under the administration of former President Benigno Aquino III, and handled by his solicitors general at the time: now SC Associate Justice Francis Jardeleza and now-Professor Florin Hilbay. (READ: Carpio, Hilbay, Jardeleza brief Duterte on West PH Sea ruling)

“This ruling is a historic win not only for the Philippines, it restored humanity’s faith in rules-based global order, it is the crowning glory of international law,” Calida said.

Duterte, however, refuses to enforce that ruling against China for now, saying that it is to avoid further conflict with the superpower. But the President mentions from time to time that China will not be allowed to avoid the ruling forever, and that he is ready to defend the Philippines’ sovereignty when the day comes.

But at the 30th ASEAN Summit last April, the chairman’s statement evaded China’s island building activities and the Hague ruling. Duterte is this year’s ASEAN chairman.

For political analyst and legal expert Tony La Viña, Duterte’s accommodation of China is a low point of his one-year-old presidency, a “disservice to the country” which would have “long-term consequences on our legal position.”

Rappler asked Calida how he reconciles treating the ruling as a victory yet sitting on it in the meantime because of Duterte’s China policy.

Calida answered: “The arbitral ruling is in favor of the Philippines, but we can play our cards wisely. He still has 5 years in his term, so we will see. He’s the architect of our foreign policy, so we cannot question his moves if he feels this is the right card to play now, then later on the other card. What I know is that it will be for the benefit of the Philippines.”

Calida served as one of the managers for the Duterte campaign, but supported Alan Peter Cayetano’s opponent in the vice-presidential race, former Senator Ferdinand “Bongbong” Marcos Jr. Calida, in fact, was one of the leaders of the Alyansang Duterte-Bongbong even if Duterte’s running mate was Cayetano.

When Duterte campaigned in Ilocos Norte in February 2016, Calida was there not only to support Duterte, but to rally for his dream tandem who he affectionately called “Aldub,” after the popular love team of Alden Richards and Maine Mendoza, aka “Yaya Dub.”

“Personally, because I’m not a member of any party, I volunteered for this job because I believe the Philippines needs real change and the best tandem so far would be Mayor Duterte from Davao, representing Mindanao, and Senator Bongbong Marcos,” Calida said. “They have charisma, they have vision, they’re sincere in their efforts to change the Philippines.”

Calida’s first foray into oral arguments at the SC was in September 2016 when he defended the proposal to bury Bongbong Marcos’ father, the late strongman Ferdinand Marcos, at the Libingan ng mga Bayani, despite heavy opposition.

That, he won, as the SC voted 9-5 to grant the late Marcos a hero’s burial.

It was second on Calida’s list of achievements. “This SC decision vindicates the political wisdom of President Duterte to hasten unity and nation healing. It put to rest the bitter debate that has divided our people for too long. It was a major step towards national reconciliation,” Calida said.

A major institutional reform being undertaken by Calida is abolishing the Presidential Commission on Good Government (PCGG) and putting the functions under his office for a “leaner, cleaner government bureaucracy.”

The PCGG is tasked to recover the ill-gotten wealth amassed by the Marcoses.

Calida said it is just proper to take over the PCGG’s work because the OSG has always represented the commission anyway in its civil suits to recover the wealth.

The PCGG has won only one of the 43 original civil suits, while 18 were dismissed and two have been archived. The rest are still pending. (Calida and his spokespersons have not responded to Rappler’s requests to be interviewed for this article.)

What’s next for Calida?

In 2011, Duterte, then Davao vice mayor, endorsed Calida to be Ombudsman, but then-president Aquino picked Ombudsman Conchita Carpio Morales. Before Morales retired in July 2018,  there were talks in legal circles that Calida has been telling people he would be Morales’ replacement.

“Sources in the bench and bar say that, to this day, Calida remains a strong contender and aspirant to succeed Ombudsman Conchita Carpio Morales, whose term ends in mid-2018,” said the Philippine Center for Investigative Journalism (PCIJ) in February 2017, when it reported on the OSG’s recommendation for acquit Napoles.

When asked about it during a press conference in February 2017, Calida said: “That has nothing to do with the case of Janet Napoles, isn’t it? I will not comment on that because, as of now, I’m still the Solicitor General, so I’m not craving for any other position.”

How about the High Court? Calida himself said that, as Solicitor General, he is considered the SC’s 16th justice.

Will that be his path too? Will the Solicitor General, who wears many hats, score one of Duterte’s 9 remaining appointments to the High Court?

Calida, with a smile, said, “Time will tell.” – with reports from Pia Ranada / Rappler.com