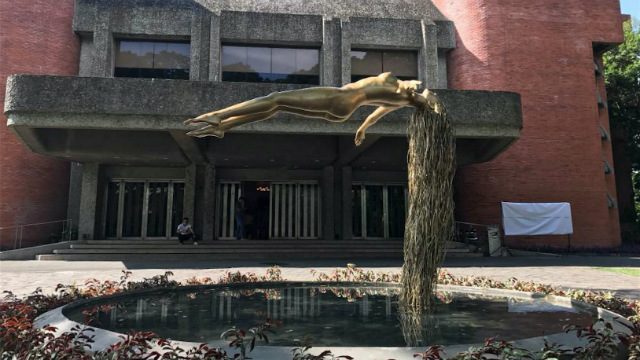 MANILA, Philippines – The so-called female version of the iconic Oblation statue is now displayed at the University of the Philippines (UP) Diliman campus.

Visual artist Ferdinand Cacnio posted photos of what netizens have called the “female Oblation” or “female Oble” on Saturday, June 24, with the hashtag #UPLift.

“My contribution to UP. It took 10 years before the big one became a reality. My gratitude to the One above,” Cacnio said in another Facebook post on Friday, June 23.

Cacnio said that this is the donation of his batch – Batch 1985 – to UP, and that the piece was set to be formally unveiled.

Cacnio, who comes from a family of artists, studied psychology and civil engineering at UP. He ran a graphic design company before venturing into sculpture.

She said that in  2008, the UP administration invited artists to participate in an exhibit called “100 years/100 nudes” and were asked to produce an artwork inspired by the UP Oblation.  Cacnio’s UP to You stood out, and he and his batchmates embarked on a fundraising project to have a bigger version on display at the UP campus.

This effort included selling limited edition table-top versions such as the one in this 2010 blog of a visual merchandiser.

Bianca also offered some of her father’s insights on the piece.

“I’ve asked my dad, and he says he chose to have her suspended in air, to symbolize enlightenment. She’s levitating, and uplifted. She’s rising towards the heavens, to honor and excellence, naked, as we all are, in the eyes of God,” she said.

“Her hair being the stand is the way he found to show this effect. They are rooted to the ground, to our country, symbolizing our roots as well,” she added.

While the sculpture received applause, it also drew negative reactions from netizens who alleged that Cacnio had plagiarized the work of Dutch artist Elisabet Stienstra – “The Virgins of Apeldoorn” which has been on public display since 2001. Cacnio, however, denied this. – Rappler.com