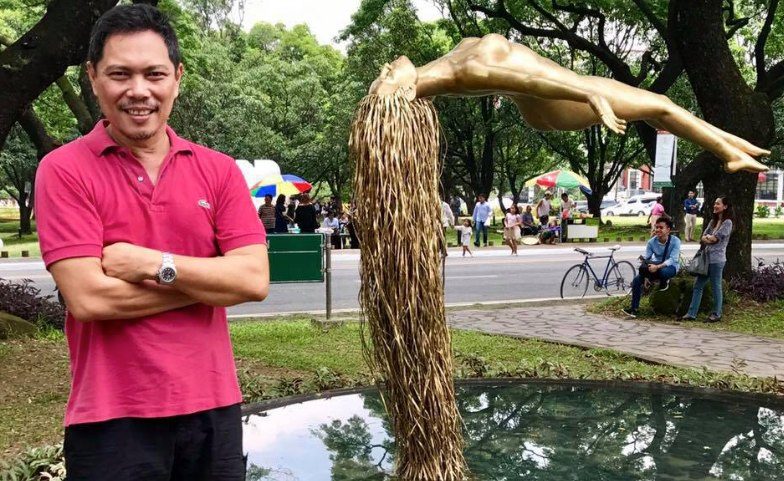 Facebook Twitter Copy URL
Copied
'#UPLIFT is my own creation,' visual artist Ferdinand Cacnio says in response to observations that he copied the work of Dutch artist Elisabet Stienstra

MANILA, Philippines (UPDATED) – Admiration for the so-called “Female Oblation” at the University of the Philippines Diliman campus turned into disgust for some after a netizen pointed out its striking similarities to the work of a Dutch artist in 2001.

Hours after images of visual artist Ferdinand Cacnio’s “Uplift” circulated on social media, a netizen posted a photo of the sculpture alongside Elisabet Stienstra’s “The Virgins of Apeldoorn”.

Cacnio’s work was supposed to be a larger version of a sculpture he first produced in 2008 for a UP exhibit; Stienstra’s sculpture was put on public display in 2001.

Past midnight on Sunday, June 25, Cacnio broke his silence on the controversy and maintained in a Facebook post that he did not plagiarize nor was he inspired by the Dutch artist’s work as suggested by some.

“Before today, I had never seen nor heard of Ms Stienstra or her work. Hindi ko siya kilala (I don’t know her). We’ve never been to the Netherlands,” he said.

“I was not inspired by her, I did not model my work after hers. I am not guilty of plagiarizing or copying her work, ‘Virgins of Apeldoorn.’ #UPLIFT is my own creation,” Cacnio added.

Cacnio and his classmates at UP, where he studied psychology and civil engineering, raised funds for the sculpture, their donation to their alma mater.

The sculpture is already on display but had yet to be formally unveiled. – Rappler.com